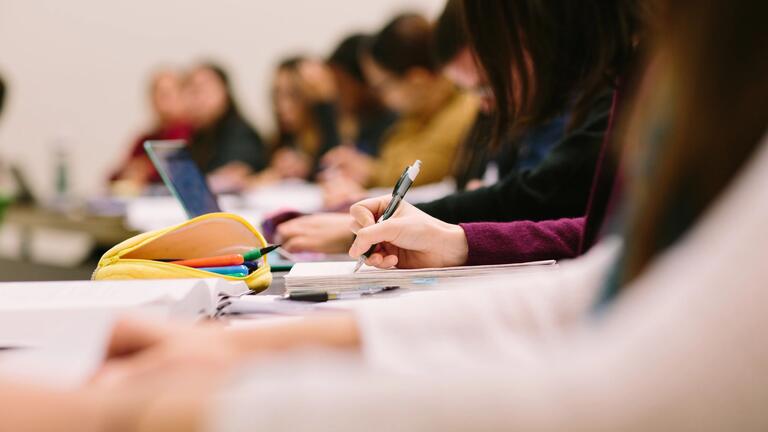 The USF School of Law publishes a variety of publications for the academic, student, and alumni communities.

To obtain copies of law school publications, contact the Office of Communications at lawcommunications@usfca.edu or (415) 422-4409. 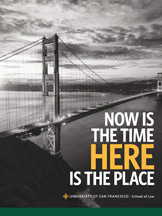 The Viewbook is published each year for prospective students and provides an overview of the law school's mission, degree programs, facilities, faculty, student life, and admission requirements. To receive a print copy of the Viewbook, please contact the Office of Admissions at lawadmissions@usfca.edu or (415) 422-6586. 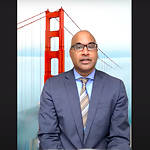 As a center for legal discussion and debate, USF Law is proud to host a webinar series showcasing our esteemed faculty and alumni as they share insights from their fields of study and practice.

The USF Lawyer is a full-color magazine published annually for alumni, students, and supporters of the law school. It includes feature articles on current trends in law and legal education, law school news, faculty scholarship listings, and alumni news. 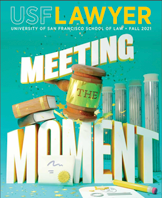 Meeting the Moment: Diary of a Law School Pandemic
Celebrating the resilience, grit, and determination of the Class of 2020.

At the Intersection
Amy Van Prooyen ’99, a pioneer in litigation communication, brings her expertise to the vaccine world. 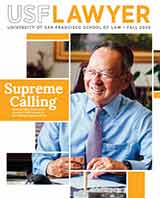 A Tale From Two Cities
David Sutton ‘08 takes a holistic approach to advocacy in the Federal Public Defender’s Office.

Quiz Master
Eli Wagner ‘11 keeps Jeopardy and Wheel of Fortune on the straight and narrow. 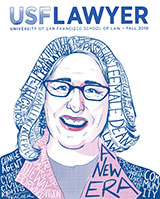 A New Era
Susan Freiwald is the 19th dean of the School of Law — and its first female dean.

Masterful Minds
Before they came to law school, they excelled at most anything they pursued. Now, they are the USF Law Provost Scholars.

One to Watch
Linda Szabados ’20 is a first-generation college graduate who came to USF School of Law to pursue her passion for antitrust, consumer protection, and privacy law. 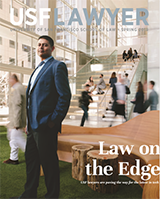 Changing the World, Worldwide
Across 46 states and 60 countries, USF School of Law graduates are making their mark in the legal profession and beyond 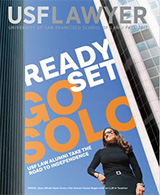 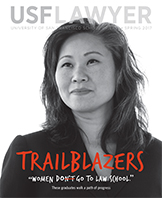 Closing Argument
We are what we believe by Jonathan Madison ’16 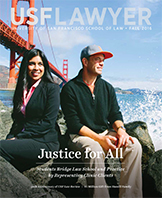 Write an Article, Make an Impact
Celebrating the 50th Anniversary of the USF Law Review

Closing Argument
Rescued from the Brink of Death: A Refugee’s Gratitude by Lauren Vuong '99 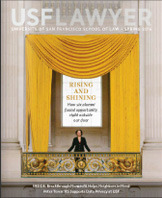 Closing Argument
From a Personal Tragedy, a Global Remedy by Alex Gerould '92 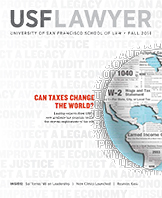 Can Taxes Change the World?
In a global economy where everything is connected, taxes are everyone’s business. Here, leading experts from USF’s new graduate tax program tackle the myriad implications of tax law.

“You Have to Learn to be a Leader"
Sal Torres ’88 places law at the center of his eclectic career. 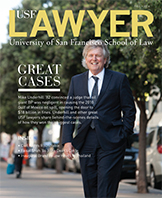 Great Cases
Five alumni recount their experiences with noteworthy cases and how their USF School of Law education helped prepare them. 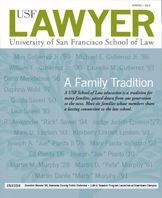 A Family Tradition
A USF School of Law education is a tradition for many families, passed down from one generation to the next. Meet six families whose members share a lasting connection to the law school.

Closing Argument
Learning to Celebrate You, by Cameron Cloar ’09 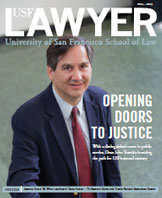 Opening Doors to Justice
With a distinguished career in public service, Dean John Trasviña is setting a path for USF's second century.

Closing Argument
Building a Career on Your Integrity, by Judge Saundra Brown Armstrong '77 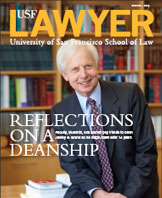 Reflections on a Deanship
Faculty, students, and alumni pay tribute to Dean Jeffrey S. Brand as he steps down after 14 years.

The Road Less Traveled
Many with legal backgrounds pursue creative employment options that draw upon skills honed during their JD education. USF School of Law graduates demonstrate how their law degree opened doors to innovative and rewarding careers. 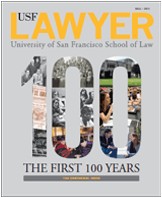 The First 100 Years
A look back over a century of USF legal education reveals a remarkable transformation since its founding in a small building on Market Street.

Closing Argument
The Opposite of Poverty, by Peter Toren '85 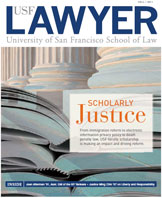 Scholarly Justice
From the nonproliferation of nuclear weapons to immigration reform to death penalty law, USF faculty scholarship is making an impact and driving reform.

Heavy Hitter
As assistant general manager of the New York Yankees, Jean Afterman ’91 is one of the most powerful women in Major League Baseball.

The USF Law Review is a quarterly journal of legal scholarship staffed and edited by students of the University of San Francisco School of Law. USF Law Review serves as USF's voice in the ongoing academic debate regarding the evolution of law. Each issue is typically comprised of articles by professors and practitioners and several student notes and/or comments. All articles are subjected to a rigorous editorial process in order to strengthen substance, polish tone, and ensure citation accuracy.