A Voice for the Voiceless

An endangered species can't file a complain, but this USF law graduate can. 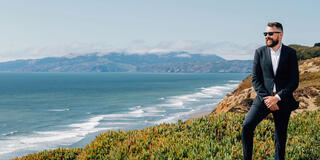 If a plant dies on a hillside and there's no lawyer there to hear it, does it make a sound?

Last year, when the Los Angeles Department of Water and Power (LADWP) started a project to replace aging wooden power poles with more fire-resilient poles in the Santa Monica Mountains, they bulldozed more than nine acres of a state park and destroyed more than 150 Braunton’s milkvetch plants — southern California native plants that are protected under the Endangered Species Act. While performing their work, a local hiker with an interest in rare plants informed LADWP that the specific plant being bulldozed was an endangered species, but LADWP’s work continued. Had LADWP conducted the required critical biological site survey, not only would they have known that the plants they were bulldozing were endangered, but also that they were operating in Environmentally Sensitive Habitat, which is given the highest protection under the California Coastal Commission laws.

After lengthy negotiations and consultations with ecological experts from various agencies involved, including the U.S. Fish and Wildlife Service, the city of Los Angeles agreed to pay $1.9 million in penalties and mitigation fees. A local agency, the Mountains Recreation and Conservation Authority, will use a portion of these funds to purchase undisturbed habitats that it will protect in perpetuity, and another portion of the funds will go to California State Parks to remove invasive species in the surrounding area.

In addition to the penalties and mitigation fees, the LADWP must also restore the damaged site to its original condition, which includes replanting, restorative grading, and monitoring the area for five years to ensure the restoration is successful. To prevent further habitat damage, the LADWP is required to have an on-site biologist and complete surveys to check the safety of projects before they continue their project.

A Job That Never Ends

And, more importantly, those actions have been successful at deterring entities from blocking public access—an issue that we deal with too frequently. Our work to protect the coastal zone and all of its resources will never end. If we do not continue to watch over the land and its habitats and species, we will lose them and our ability enjoy them. After all, every law is only as strong as its enforcement.

Logan Tillema ’15 works in the statewide enforcement department of the California Coastal Commission.