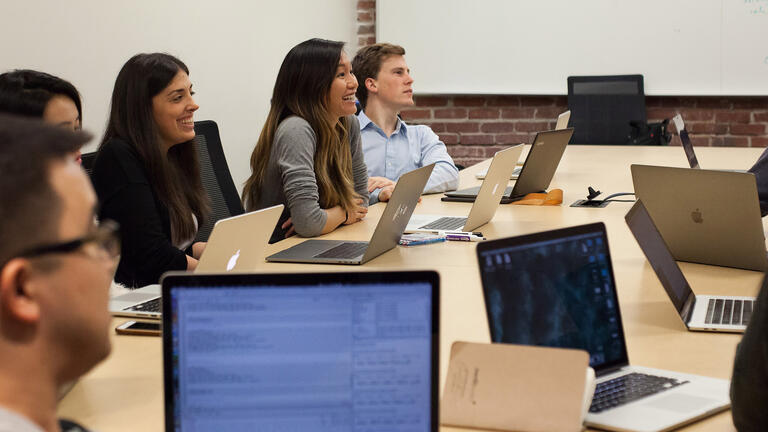 The Data Institute at the University of San Francisco brings USF to the forefront of applied data science. As the umbrella organization for interdisciplinary data science research, degree programs and continuing education, the Data Institute creates new avenues for connections to industry, research, and educational opportunities.

Jeff Hamrick is the Senior Director of the Data Institute. He is responsible for the Institute’s vision and strategic plans, as well as its various programs and initiatives.

Jeff Baker - Zillow Group (Trulia), Manager of Decision Science
Jeff leads the Decision Science team at Zillow Group (Trulia), where his team guides product, engineering, and design teams with data-driven insights. Jeff has also held roles at Salesforce, Ubisoft, and Yahoo!, utilizing consumer and behavioral analytics to inform marketing strategy. Prior to his industry experience, he spent three years teaching English in Japan through the JET Programme. Jeff holds a Bachelors in Philosophy from University of California, San Diego, and is a graduate of the MS Data Science at University of San Francisco.

Christina Choi - Eventbrite, Head of Data Insights
She joined Eventbrite as the first data scientist dedicated to the product and engineering teams, focused on bringing statistical rigor to their decision-making process. Led data science on experimentation, which is critical to Eventbrite's product optimization, improvement, and development. She previously served as a Senior Data Scientist as well as Analytics Manager, Search for Mozilla. Christina graduated with her MS in Statistics as well as a BS in both Statistics and Economics from Purdue University.

David Clifford - Google X, Science Lead
David is a diversity & development focused data scientist & leader with 14 years experiencing conceiving, designing, and delivering research and products. He is passionate about using data science to solve impactful applied problems. Currently at Google X as Science Lead, David previously oversaw a high performing team at Metromile, developing models to understand driver behavior to better price risk. Prior to Metromile he has led data science teams at The Climate Corporation and with Australia’s Commonwealth Scientific and Industrial Research Organisation. David has an BSc and MSc in statistics from the National University of Ireland as well as a PhD in statistics from the University of Chicago.

Funmilayo Doro - Buzzfeed, Director of Data Engineering
She previously was the Director of Platform Engineering at Zephyr Health. Funmi is a graduate of the MS Analytics at USF and also holds a MS from KTH Royal Institute of Technology and a BS in Computer Science from Babcock University.

Henry Humadi - VP of Data Science Phylagen
Henry graduated from McMaster University/McGill University with a PhD in Computational Condense Matter Physics and has published multiple articles in physics including in Physical Review Letters. He is currently the Machine Learning Director, Intelligence Engagement at Leanplum. In addition to his time in the industry, Henry was a Visiting Scholar at UC Berkeley and UC Davis.

Claire Lebarz - Airbnb, Data Science Manager for Search
She is leading initiatives ranging from analytics to machine learning applications. She previously led the data science team at Turo where she helped grew the car-sharing platform from Series B to Series D. Applied mathematician, engineer and economist by training, she researched the link between inequality and economic instability, between the Paris School of Economics, the International Monetary Fund and UC Berkeley, where she was a Visiting Scholar. She transitioned out of academia to focus on innovations in the sharing economy. Her expertise lies in online experimentation, pricing, recommendation systems, two-sided marketplaces, data democratization and governance. She is also passionate about scaling problematics, cognitive biases, and a champion for diversity.

Helen Mou - Shopify, Project Lead
Helen Mou is a Product Lead at Shopify, where she leads cross-functional teams building commerce tools for 1M+ entrepreneurs using the platform. Helen has deep experience as a product manager building retail technology, conversational commerce, and artificial intelligence products. Helen has also previously led marketing automation and data analytics at UNIQLO and was a corporate strategy and finance manager at Walmart’s Sam’s Club. She is an instructor for and co-creator of the Machine Learning for Business certificate program at the Data Institute at the University of San Francisco. Helen earned an MBA from Harvard Business School and an AB from Brown University in Economics and Environmental Studies.

Sriram Sankar - Uber, Principal Engineer
Sriram is responsible for search and other related technologies at Uber. He has held previous positions in search at Google, Facebook, and LinkedIn. He was responsible for adapting Unicorn for search at Facebook and building the Galene search engine at LinkedIn. Previously his interests were in compilers and software engineering tools - he was the primary author of JavaCC. Sriram obtained his PhD in Computer Science from Stanford University, and BTech in Computer Science from Indian Institute of Technology, Kanpur.

Kimberly Shenk - Novi Co-founder
She previously lead Business Analytics and Data Science at Eventbrite. Prior to Eventbrite, Kimberly co-founded Modern Approach, a boutique customer analytics consultancy that helped companies use their data to create highly differentiated customer experiences. Kimberly was a Senior Data Scientist leading the Customer Analytics team at Sports Authority and a Data Scientist for the United States Air Force where she delivered advanced operational analysis on the optimal mix of air, space, and cyberspace capabilities to improve the efficiency and effectiveness of US military operations in the Pacific. While serving in the Air Force, Kimberly also worked on healthcare related research for Draper Laboratory to include pattern-recognition algorithms for identifying patients at risk for Myocardial Infarction. Kimberly holds a double Bachelor of Science in Mathematics and Operations Research from the United States Air Force Academy and a Master of Science in Operations Research from the Massachusetts Institute of Technology.

Katherine Zhao - Google, Senior Machine Learning Engineer
Katherine is a graduate of the MS Data Science at University of San Francisco. After her graduation, she has been working as Data Scientist and ML Engineer at General Electric, Microsoft and Google. Katherine has broad interests in Machine Learning, Deep Learning and is passionate about harnessing the power of AI to solve interesting problems and help with business transformation.

Carlos is interested in Natural Language Processing, specifically in the fields of topic modeling and the automatic acquisition of hierarchically-structured knowledge by means of taxonomies and knowledge graphs. He is also conducting research in computer vision models applied to radiation oncology. He studies how transfer learning and model complexity impact the accuracy of the task.

Michael is interested in how geometric and algebraic tools can be used in data science, in particular how differential, integral, and algebraic invariants can be applied in shape analysis.

Isabel conducted research in the field of fluid dynamics, specifically utilizing experiments to study the dynamics of collective swimmers, like zooplankton, and their impact on transport and mixing in the ocean.

Abbie's research examined electrical brain signals from adolescents with and without anxiety. She showed differences in signals associated with attention and behavioral inhibition in adolescents.

Lara is an ecosystem ecologist interested in Data Science as a tool for minimizing the impacts of climate change. Her research addresses diverse topics including biofuels, phytoremediation, and climate change.