A Relay Race Toward Justice 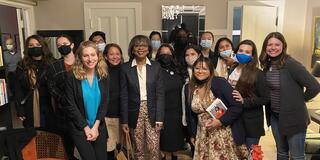 At a City Arts & Lectures talk in San Francisco, Anita Hill discussed with USF Law Professor Lara Bazelon where she started and how far we have to go in the fight against sexual assault.

When Hill was debating whether to come forward during the Supreme Court confirmation hearings of Clarence Thomas in 1991, she hesitated. She said two things kept her from stepping up. “Firstly, I am private,” she said at the talk on Oct. 22. “My mother raised us to be very circumspect about how we talk about the harm that was done to us by the system.”

The second reason: “It wasn’t really a topic that I had chosen. It was a topic that chooses you,” she said. At first, Hill didn’t want to accept the responsibility that comes with testifying, she said. “I learned how difficult it is to take on a cause that is not of your choosing.”

Hill told herself her job was not to convince the Senate but to tell them what happened. “I can do my job as long as my job was to tell my story,” she said.

Bazelon remembered being a teenager and watching the hearings on TV, “pre-flat screens and pre-streaming,” she said. “This was the event, and everyone was riveted.”

Hill says she did not expect the world to follow her testimony. “I was just trying to make it through the day,” she said.

It was only 10 years ago that it hit her. “I was talking to students at a California high school when a boy walked up to the mic and asked, ‘How does it feel to know that you’ve changed the world?’”

Since then, Hill said, she has heard from men and women sharing their stories of sexual harassment and assault. In her book Believing: Our Thirty-Year Journey to End Gender Violence, Hill tracks the origins and course of gender violence in society.

It is everyone’s problem, she said, regardless of sex or gender orientation. “One in six men and boys have experienced some form of sexual misconduct,” she said. “We need to talk about that.”

Hill also said the MeToo movement is only a small part of the picture. “When we have representatives of a movement, we tend to think that only those people are the victims,” she said. But “when you talk about victims, you’re talking about your friends, your neighbors, and your family members.”

Hill is not immune to burnout, especially after working with survivors, she said. But she finds strength in the progress that has been made. “I am living proof that where we are with the conversation is light years beyond where we were in 1991,” she said.

“We are raising a generation of people who expect more from their leaders,” she added.

Hill offered her advice to survivors contemplating coming forward. “Know what your resources are. Know where to find support because it’s going to be difficult.”