A Voice from Death Row

More than 200 death penalty opponents and members of the USF legal community came together on April 17 for “Innocent on Death Row: A Conversation with Kevin Cooper” about the death penalty inmate’s case, how wrongful convictions happen, and the importance of new DNA testing.

Professor Lara Bazelon led the conversation with Cooper and Norman C. Hile, a senior counsel at Orrick, Herrington & Sutcliffe LLP in Sacramento who has served as Cooper’s pro bono attorney for the past 15 years. The reception after the discussion featured Death Penalty Focus President Mike Farrell.

“There is nothing like hearing directly from someone on death row to bring home the harsh realities of our criminal justice system and the lives that it destroys when it runs amok,” said Bazelon, who directs USF’s Racial Justice Clinic and Criminal and Juvenile Justice Law Clinic and recently wrote a book about wrongful convictions. “It is important to read cases and understand legal reasoning. It is equally important to hear from the people directly impacted.”

I learned from Kevin Cooper what I could never learn from a book, and this experience is going to have an impact on every client I come in contact with in my career.

Cooper, who called in from San Quentin State Prison, has been on death row for 34 years for brutal murders he has always insisted he did not commit, after a trial he says was infected by corruption and racial bias. He is a writer and advocate against the death penalty whose case has received international attention. In 2004, he was hours away from execution before a court decision spared his life. Late in 2018, then-Gov. Jerry Brown ordered DNA retesting in Cooper’s case using more sophisticated methods. In early 2019, Gov. Newsom issued a new order mandating a wider investigation.

This is a much-needed and long overdue conversation about the death penalty in this progressive state of California, said Cooper, who is grateful to Gov. Newsom for granting a moratorium on the death penalty. “Hopefully this is the beginning of the end of the death penalty in California. But that can only be if people like you and I and others support him,” he implored the audience. “After this event is over tonight, I hope that you will continue this conversation so we can build the grassroots movement to end this historic and horrendous crime against humanity.”

“I got the opportunity to hear from a person with a perspective on life that I do not share and likely will never share,” said Katherine E. Abalos ’20, who’s worked at the San Francisco and Alameda County public defenders offices as part of her USF legal education. “His voice and similar marginalized voices have so much to contribute to the world, yet we often mute them. I learned from Kevin Cooper what I could never learn from a book, and this experience is going to have an impact on every client I come in contact with in my career.”

Watch a video of the entire event on YouTube. 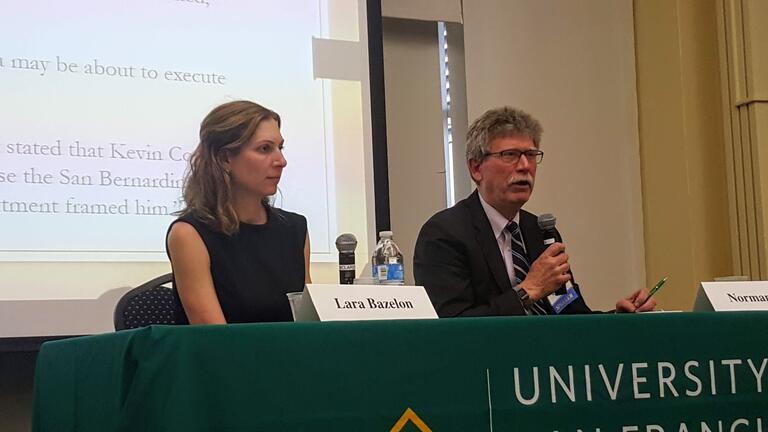