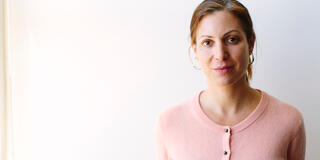 Professor Lara Bazelon, a champion of criminal justice reform and an outspoken public intellectual, has been appointed the Phillip and Muriel Barnett Professor of Trial Advocacy.

Bazelon is the director of USF’s Criminal and Juvenile Justice Clinic and Racial Justice Clinic. She is also a regular contributor to outlets including Slate, Politico, and the New York Times.

“I'm really grateful to the law school for giving me this opportunity,” said Bazelon.

The Barnett Professor of Trial Advocacy is an endowed chair position that recognizes a faculty member with significant experience in trial advocacy. As part of her new role, Bazelon will organize public events to educate students and the public about criminal justice issues and the social justice mission of USF.

“The goal is to raise awareness about systemic unfairness — including racism, gender bias, and socioeconomic bias — in the criminal justice system, and also to energize the students to go out and make change,” she said.

Bazelon joined USF in 2017 after serving as director of the Loyola Law School Project for the Innocent, a program to exonerate wrongfully convicted inmates. She also spent seven years as a federal public defender in Los Angeles.

In her role as director of USF’s Criminal and Juvenile Justice Clinic and Racial Justice Clinic, Bazelon supervises 2L and 3L students whose responsibilities include speaking for inmates at parole hearings, representing clients facing misdemeanor charges, and advocating for students facing expulsion hearings.

“She has provided her students with incredible learning experiences — including many groundbreaking successes at court and in bail hearings, and she has even raised money for the clinic,” said Dean Susan Freiwald. “Her clinic graduates emerge with skills, confidence, and the ability to land impressive jobs.”

Bazelon’s goal is to make students their own best advocates, she said. “They learn how to be nimble and flexible in the moment, because litigation is very dynamic. Part of being effective requires being able to change strategy midstream.”

Bazelon, who teaches classes including criminal procedure, also acts as a mentor and role model.

“She's so well respected within the criminal law community and she has such a vast body of knowledge that she's absorbed throughout her career,” says Kendall Baron ‘21. “I feel like I learn something new every time I'm with her. She's also just genuinely very supportive and is always trying to help us succeed.”

A voice for women

In addition to championing her clients and students, Bazelon has been a vocal champion of women attorneys.

In a 2018 article in the Atlantic, she outlined gender bias in the courtroom — including her own experience with a sexist judge.

She wanted issues that come up frequently in legal practice to “get out into the real world and really get discussed in a full-throated way,” she said.

Freiwald commended Bazelon’s ability to communicate her field to the broader public.

“Professor Bazelon has raised the law school’s profile through her widespread following and her excellent reputation as an author and scholar,” she said.

Bazelon’s advocacy extends to the classroom, where she lectures on a host of topics, including implicit bias, gender and racial bias, and grassroots activism. She also invites guest speakers to talk to students about how they’ve managed to cope with and combat negative experiences.

“I think it's important to instill this fighting spirit in students, where they're not going to accept the status quo,” she said. “They're going to work to overcome this kind of bias so that other people don't have to deal with it moving forward.”