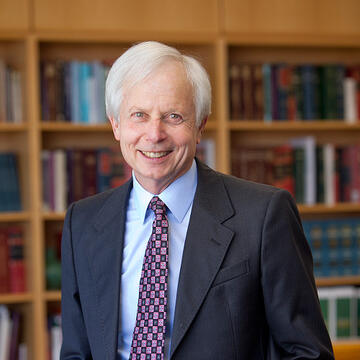 Jeffrey S. Brand joined the faculty at USF School of Law in 1986 and was the 17th dean of the USF School of Law from 1999-2013. Brand received his AB from UC Berkeley in 1966 and his JD from UC Berkeley School of Law in 1969. His scholarly and professional work has focused on human rights, global justice, constitutional law, and various civil procedure and evidence issues, including recovering statutory attorney's fees in civil rights actions. As a teacher, Brand received the USF School of Law Distinguished Professor Award four times. He has taught in the fields of civil procedure, constitutional law, evidence, labor law, and remedies.

As dean, he directed the transformation of the law school's facilities, including the completion of the Dorraine Zief Law Library and a complete reconstruction of Kendrick Hall. He oversaw an expansion of the faculty, significantly increased fundraising in support of law school programs, and sharpened the law school's mission of educating minds and hearts to change the world. In particular, he expanded clinical offerings and other opportunities for students, and increased international courses, internships, and global justice programs through the Center for Law and Global Justice, which he founded in 1999 and where he continues to serve as chairman. He spearheaded numerous global justice and international legal assistance projects, including a program to promote the rule of law with justice in Cambodia (establishing an independent law school, revising law curriculum, and training judges on war crimes and general decision–making), Vietnam (training judges on labor–related issues, advising the Vietnamese Supreme Court, and providing counsel on legal education), Indonesia (dispute resolution and legislative drafting), China (labor–related issues), and East Timor (legislative drafting), among others.

After his graduation from Boalt Hall, Brand received a Robbins Fellowship to work with his mentor, Professor and former California Supreme Court Justice Frank C. Newman, on international human rights issues. He also received a Reginald Heber Smith Fellowship to practice poverty law in New York's South Bronx. Thereafter, he served as a public defender in Contra Costa County and as a private criminal defense attorney. He was appointed by Gov. Jerry Brown as an administrative law judge on the Agricultural Labor Relations Board and later became a private labor lawyer specializing in Title VII plaintiff's litigation with the firm of Fransworth, Saperstein and Brand, bringing successful class action suits against companies that included Fireman's Fund and State Farm Insurance. Brand also co–founded and was editor–in–chief of the Federal Litigator magazine. Throughout the 1990s Brand was the general managing partner of the Reno Silver Sox in the Class A California league.