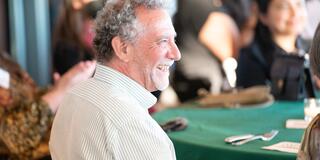 Professor Tim Iglesias, a former Jesuit, leader in housing law and pioneer of meditation in lawyering, is retiring after 20 years teaching at USF Law.

Iglesias has been a fixture in USF classes on Property, Community Property and Land Use, along with courses he created on Residential Segregation, Eviction Lawyering and Contemplative Lawyering. The latter course integrated concepts of Ignatian spirituality that he learned from 13 years as a Jesuit.

“I am experiencing a fair amount of sadness and grief as I get rid of stuff, particularly my teaching notes, because I've spent hundreds of hours trying to improve them,” he says.

Iglesias, who has also served on the California Fair Employment and Housing Council since 2015, says in retirement he is looking to pursue opportunities in four different realms: mindfulness; increasing access to justice; doing personal work with people making life decisions; and affordable housing and anti-discrimination.

“I've loved teaching, and it's been a great privilege,” Iglesias says. “But there's all kinds of things I'm interested in that I can't do while I'm teaching, since it's a full time job.”

USF Law Dean Susan Freiwald praised Iglesias’s work with the law school, noting that he always thought outside of the box to incorporate spirituality into law practice.

“When I think of the Ignatian tradition of cura personalis, I think of Professor Iglesias,” Freiwald said. “His efforts to bring mindfulness practices to the law school —  along with his obvious love and care for each of our students — has done immeasurable good for us here. He will be missed.”

A self-described “Navy brat” by birth, Iglesias was first exposed to the Jesuits when he went to Loyola High School in Los Angeles. While attending Santa Clara University, he decided to join the Jesuit order. He spent 13 years doing ministry in a variety of contexts, including Canada, Taiwan and Central America, working with people experiencing homelessness and community organizing in low-income communities.

A crisis of faith based in the theological claims and history of the church led him to the decision to leave the Jesuits about a year before ordination, but even in shifting to secular life he was appreciative of the Jesuits for providing “the tools I needed to continue on my own spiritual journey.”

However, the transition to the secular world wasn’t easy.

“I realized the only thing I was qualified for was to be a priest, and that wasn’t in the offing anywhere.”

He decided to go back to school at Stanford Law, graduating in 1993.  Two years later, he got a job at the Nonprofit Housing Association of Northern California, where he worked for seven years dealing with local opposition to affordable housing in the Bay Area. He noted that the more he got into housing law, the more he saw it was a profound realm that “touches so much in people’s lives.”

“I realized that housing is just so important to a human being flourishing, families flourishing and communities flourishing,” Iglesias says. “And there’s so many different dimensions to it. It is endlessly interesting to me.”

He began teaching full-time at USF Law in 2003, focusing on Property and Land Use Law. The Eviction Lawyering course has been one of his favorite aspects of teaching, as he would bring in practitioners, have students go to eviction hearings and meet with judges.

“Eviction law is basically a mini version of all aspects of litigation, but it’s crammed into a very short period of time,” he says.

Iglesias said it was a great experience to come full circle and teach at a Jesuit university, as he was always appreciative of the order’s approach to scholarship.

“With the Jesuits —  including when I was studying theology as a Jesuit — the approach was never to try to convince me of something, but to present the tradition with all of its warts, as an invitation to engage rather than an attempt to persuade.”

Iglesias has meditated every day for 15 years, a mindfulness practice that stemmed from his time in the Jesuits.

“My spirituality has been reconstructed since I left the Jesuits,” Iglesias says. “I’m able to translate Ignatian spirituality in a way that really helps me. Particularly the process of learning how to discern important decisions in life.”

He even included a version of Jesuit spirituality in his Contemplative Lawyering class, changing the word “God” to reflect the notion of a person’s “highest value.”

“It was very, very meaningful to me, to be able to engage and make myself available to students at that level and in that way. A lot of the students who took the course really expressed to me how important it was to them and how it had become a pivot for them on a lot of things. So that's really gratifying.”

He noted mindfulness is a practice that can be particularly salient for law students, who have been trained to be reactive to questions asked in the classroom.

“In law, we’re all in our heads all the time,” Iglesias says. “But to be a good lawyer, you can’t just be a big brain. You have to be sensitive to how people are responding, you have to be able to develop rapport with people — your client included — to get information you want to get. You have to be able to anticipate and have a high degree of emotional intelligence. All of those skills are really easily taught and experienced within the context of a mindfulness class, because a lot of it is about slowing down.”