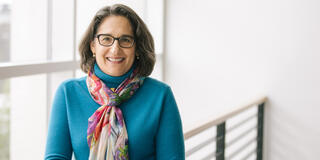 After nearly a year leading USF School of Law as interim dean, Susan Freiwald will become the school’s 19th dean — and its first female dean — since its founding in 1912. Her appointment is effective July 1.

“Susan’s strong record of accomplishment, especially in curricular reform during her time as associate dean, was a key factor when I appointed her last year to the interim role,” said Provost Don Heller. “For the past year, thanks to her leadership, the school has made significant advances in support of student success, bar exam preparation, and operations.”

Freiwald, who began teaching at the law school in 1997 and was promoted to associate dean for academic affairs in 2017, has been recognized for both her scholarship and her teaching. An expert in information privacy law, she secured landmark privacy legislation passed in California in 2015. She is a recipient of the School of Law Distinguished Professor Award.

“I’m honored to lead the School of Law into the next phase of its 107-year history,” Freiwald said. “With the help of strong faculty, dedicated staff, accomplished alumni who give back to their school and communities, and hardworking students, my goal is to enhance and develop programs that meet the needs of the next generation of lawyers and the world in which they will practice.”

A former software developer, Freiwald has published widely on online surveillance and the Fourth Amendment. She has authored and co-authored amicus briefs in major cases involving electronic surveillance laws, has argued two cases in federal appellate courts, and her scholarly work has been cited in numerous state and federal court decisions.