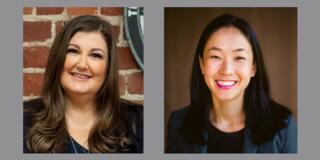 After Jennifer Fiore ‘99 and Susan Kang Gordon ‘09 discovered widespread neglect at a Hayward, California nursing home, the two attorneys had to move mountains to get justice for ten elderly clients and their families.

Fiore and Kang Gordon asked for an expedited civil trial date, taking and defending close to 100 depositions in less than four months, before heading straight into trial against Parkview Operating Company, LP, the licensee, and Mariner Health Central, Inc., the management company.

“It was crazy; we just kept going,” Fiore says.

But amid that chaos, Fiore and Kang Gordon did not cut corners: following a four-and-a-half month virtual trial, an Alameda County civil jury found the companies guilty of fraud and neglect, and awarded the plaintiffs $13.5 million dollars in damages, plus attorney’s fees and costs.

But for Fiore and Kang Gordon, who see issues with staffing shortages and neglect as a “systemic” problem that results from profit-driven incentives in chain nursing homes, the biggest win came from the judge’s decision to impose an independent monitor who will scrutinize the care being given to the 200 residents at Parkview.

“A big issue with nursing homes that are run by this group — as well as nursing homes throughout the country — is that they are understaffed,” Fiore says. “And a primary goal of the monitor is to right the ship to prevent ongoing understaffing, because understaffing leads to the falls and the wounds and the malnutrition and the inadequate hygiene that our residents experienced.”

“It wasn’t about the money for anybody,” Kang Gordon added. “It was: ‘What can we do for these 10 people, and then the remaining residents?’”

Kang Gordon and Fiore were sharing an office space when Kang Gordon, a personal injury attorney who began working on elder abuse cases about four years ago, got wind of issues at Parkview. After discussing the potential concerns, the two attorneys decided to visit the nursing home and assess the situation themselves.

Parkview residents were experiencing falls and untreated wounds, along with malnutrition.

“This case took on a life of its own because of how extremely neglected they were,” Fiore says.

Residents and family members immediately began “flocking” to them, with one family member even running to catch them at their car to ask for legal assistance.

“Had we not really wanted to understand the situation and see people face-to-face, we probably wouldn’t have had that many clients,” Kang Gordon says.

With help from Fiore’s law partner and fellow USF Law alumna Sophia Achermann ‘08, the two attorneys dove deep into parent company Mariner Health Care’s corporate structure and management system, how they set up and ran the nursing homes, and their movement of money, “to get to the root of why this was happening,” Kang Gordon says.

They fairly quickly realized that the issue was not at the care level, but an extraction of profits at the expense of residents.

“Chain operations like this one that are focused on profit and that are not subject to further scrutiny such as an independent monitor, have little incentive to change the way they do business, because it’s working for them,” Kang Gordon says. “I attribute very little to an individual employee. It’s working in this system of greedy, profit-driven corporations who just happen to be in the healthcare business that’s dangerous.”

As they moved through pre-trial preparations, Fiore and Kang Gordon uncovered discrepancies in time-clock documents, which the company had falsified in order to claim the home was fully staffed when it was not.

“When you look at all this, you figure out those (staff members) weren’t in the building,” Kang Gordon says. “It was a complete lie, and they had nothing to counter that.”

Different Paths to the Same Case

Even as they ended up in the courtroom together, Kang Gordon and Fiore took distinct routes through law school to get there. Kang Gordon began in USF Law’s full-time program but wasn’t certain that she wanted to become a lawyer.

“I was a fish out of water. Everybody spoke better than me, everybody dressed different, I just felt like I didn’t belong. It was a really intimidating experience for me.”

She ultimately finished in the part-time evening program and went on to form her own personal injury firm.

Fiore says their diverging paths offer a lesson to students: “The path to being a lawyer could be anything you make of it, and USF gives you that opportunity. We came at it in different ways, and we both ended up in the same place, on the same case, doing right by our elders and dependent adults.”

Fiore credits her USF law clinics experiences— she worked in a housing clinic and the International Human Rights Law Clinic with Professor Connie de la Vega — for helping her develop into an effective lawyer.

“Working with Prof. de la Vega, and having the ability to gain practical skills to get into a courtroom, to do a deposition while in law school, were invaluable experiences for me and my career.”

And the two women say they’ve learned a lot from each other, and they encouraged attorneys to work as teams more often.