From Exploitation to Empowerment 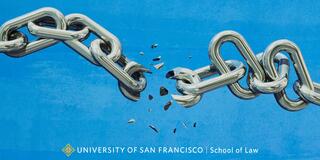 Combating human trafficking isn’t only about prosecuting the traffickers. It requires engaging communities, organizing advocacy groups and easing the way for victims to engage with society.

The 2021 Law Review symposium, “Exploitation to Empowerment: Leveraging the Law for Survivors of Human Trafficking,” brought together a number of stakeholders over three sessions to discuss the myriad ways to fight human trafficking in the Bay Area and beyond.

The symposium’s two virtual panels discussed civil remedies for survivors that take into account trauma awareness, as well as the technological innovations helping the fight against trafficking. Alameda County District Attorney Nancy O’Malley presented the Jan. 29 keynote address on H.E.A.T. Watch, a nationally recognized, multi-disciplinary approach that has been adopted by several U.S. agencies, including the Department of Justice and Health and Human Services.

Law Review Symposium Editor Meghan O’Day ‘21 feels buoyed by the discussions: “The collaboration seen here among academics, advocates, policy makers and law enforcement is exactly what we need to put an end to human trafficking in the Bay Area and the U.S.”

She noted the last prong of that blueprint is the “one part where we can never do enough,” because much of the work involves convincing community members that human and sex trafficking are happening in their own backyard — often in schools and other places where young people congregate.

Since starting H.E.A.T. Watch in 2009, O’Malley said her office has prosecuted more than 800 trafficking cases and trained more than 10,000 police officers in spotting potential trafficking situations. But even more important than catching the perpetrators, she says, is “replacing the basic necessities of life” for rescued victims.