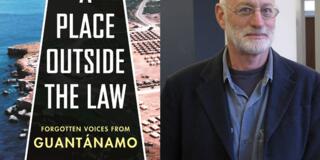 January 11, 2020 marks the 18th anniversary of the opening of the U.S. detention facility on the Guantanamo Bay Naval Base in Cuba.

USF Law Professor Peter Jan Honigsberg spent over a decade interviewing 158 former detainees, their families, prison guards, military personnel, and civilian lawyers in an effort to document the violation of the rule of law and to give voice to victims of abusive interrogation policies.

This past fall, Honigsberg published their accounts in a book, excerpted below, A Place Outside the Law: Forgotten Voices from Guantánamo by Peter Jan Honigsberg. Copyright 2019.

After the attacks on 9/11, Mohamedou Ould Slahi was seized by the Mauritanian secret police at his family’s home. The police told the family that Slahi was in a safe place. The family presumed this meant that he was in a police station in Mauritania. But he was not. Slahi was in Guantánamo.

His family was fortunate. They learned of Slahi’s fate through an article on Guantánamo in the German magazine Der Spiegel. Slahi’s brother, who was living in Germany, had seen the article.

Other families were not as fortunate. Many families had heard nothing from their loved ones after the U.S. bombing of Afghanistan following the 9/11 attacks. The families thought that their husbands, sons, and fathers had been killed in the bombings. But many of the men had not died. They had been captured by Afghan and Pakistani soldiers and sold for bounty to the Americans. Then they were disappeared into Guantánamo.

Because the U.S. refused to release the names of its prisoners, many families did not know the fate of their loved ones. It was not until May 2006 — more than four years after the first 20 detainees were transferred to Guantánamo in January 2002 — that the US officially released the names of the detainees. And it is possible that the government would not have released the names even then were it not for US Navy staff attorney Lieutenant Commander Matt Diaz.

As a young man, Diaz was a high school dropout working as a full-time dishwasher, going nowhere. He and his girlfriend were living in a motel off a freeway in San Bernardino County, in Southern California. Three people — his father, the motel manager, and one of the cooks in the restaurant — were very concerned about him. Each of them individually encouraged Diaz to enlist in the military and find direction. He followed their advice.

Diaz took college courses while in the military. Later he pursued a law degree to become a judge advocate general officer in the navy. (“Judge advocate general,” or JAG, is the term used for military attorneys.) He enrolled in JAG school and obtained an LLM, or master of laws, degree. While working toward the degree, Diaz took a semester of international law classes. When the opportunity arose to choose a foreign station, he decided on Guantánamo, rather than Afghanistan or Iraq. He began his work in Guantánamo in July 2004.

Diaz was working at his desk as deputy legal advisor at Guantánamo in early 2005 when he was copied on an email from a human rights attorney in New York. The attorney had requested that the government release the names of the men held in Guantánamo.

“Knowing that we were not going to release the names, knowing who my relief was going to be, and just knowing the general atmosphere that we’re operating in, there’s no way these guys were ever going to be identified,” he said. He asked himself whether there was something he could do. “I know you can’t do it through proper channels because it’s just top-down. There’s no way this is going to be done properly,” he said to us.

Diaz struggled with his conscience. He knew that there were many families still wondering what happened to their loved ones and whether they were still alive. Diaz believed that but for him, the families might never know.