Peeling back the curtain on criminal law

by School of Law 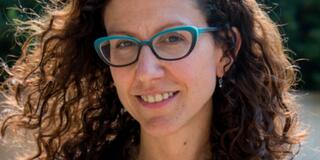 Professor Deborah Ahrens believes law students thrive when they learn not just what the law is, but whether current laws reflect where society should be.

A tenured professor at Seattle University School of Law, Ahrens has an extensive background both in public policy and criminal defense, and recently joined the USF Law faculty as a visiting professor. This academic year she will teach evidence and criminal procedure.

We recently spoke with Ahrens about how law and policymaking can interact, bringing current events into the classroom, and what it’s like to take more than 1,000 barre classes.

You have experience in both law and public policy, particularly drug policy. How do those specialties interact?

I’ve become more policy-oriented in my scholarship, which is really liberating. For example, I wrote an article a couple of years ago where I advocated for states that have legalized marijuana to do what California, thankfully, has been doing: expunging marijuana convictions. The scholarship is legal analysis, but it’s legal analysis leading to a policy recommendation, where we want the government to do a certain thing. It’s not: “Courts should adopt this particular theory of law.” It’s: “We think state legislators should do X.”

Is that something you bring into your classes?

Yes. One of the things I want students to always be thinking about is the implication of the law that they're learning. Not just descriptively what the law is, but what that means for marginalized communities and for people in general.

The Elizabeth Holmes trial is taking place right now and that’s one topic we’ll discuss in my class. According to people who have estimated what her legal team probably costs, she's apparently paying eight figures for an attorney. She's getting much better pre-trial resolutions to her motions than I think most of us who practice criminal defense would expect to get.

Is that what we want — that your ability to get justice will depend on how well your attorney can navigate evidence rules, or that people who can afford to hire attorneys who can bury the opposing side in pretrial evidence motions may be more likely to prevail? If evidence law were less voluminous, less complicated, and more accessible to people, it probably wouldn't matter as much if you have eight figures to spend on an attorney. I really want us to think about that, because the rules of evidence aren’t constitutionally mandated. Those are legislative choices, and maybe we think legislators should make different choices.

It sounds like you bring in a lot of current events into your classes.

Right. Current events that happened, or pop culture things that haven't actually happened. I had a book chapter that came out a couple of years ago about using Broadway shows in criminal law to teach various concepts that are otherwise sort of difficult. I'm not teaching criminal law here at USF, but we do Cell Block Tango as a review exercise for homicide in that class. We do Ballad of Guiteau when I teach insanity.

Speaking of performance, you have taken more than 1,300 barre classes. What have you learned from that?

I am at 1,336 classes. A story I tell, which tragically is absolutely true, is that about a week after I picked up barre, I went to the 6 a.m. class in my head-to-toe spandex, kind of bleary-eyed. I went into the studio, and I heard “Professor Ahrens?” from behind the desk, which is the last thing you want to be hearing at 5:55 a.m. Of course, it was one of my students, who was teaching barre part-time.

It really was this kind of humbling experience having a student of mine teach me how to do something that at that point I was really not very good at. I think it's good to remember what that's like, to not be familiar with something and to be learning. Because that's what your students feel. They will get better, but you don't know what you don't know yet.

And learning law really is a lot like exercise. You can't just sit there and watch somebody do it. You can't wait until the day of the 5K and decide today's the day you're going to get out of bed and run. You really have to put in the work every day. It just does not work to try to cram in your marathon training in a week.

This interview has been edited for length and clarity.