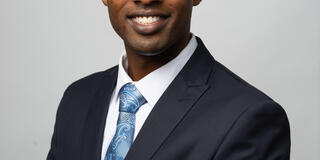 Allen Williams '22 isn't the type of person to pass up an opportunity.

In addition to his law studies, Williams serves as secretary of the Student Bar Association, treasurer of the Black Law Students Association, outreach coordinator of PRIDE Law, and as a student representative on the Anti-Racism, Diversity, Equity and Inclusion Standing Faculty Committee.

Williams, who already holds two Master’s degrees in Public Diplomacy and Gerontology from the University of Southern California, recently accepted a position as a summer associate at Reed Smith LLP, the international law firm.

As he prepares for his first job in big law, he says he will continue with the drive behind all of his work: “prioritizing change in the world.”

“Even if you're representing large corporations, I think you can bring about change. Just because you're not on the ground with criminal defendants who were wrongfully accused or protecting victims through prosecution, that doesn't necessarily mean that your position at a law firm won't affect the community in myriad ways.”

USF Law provided the perfect fit for Williams, who is originally from Oakland. Early on, he could tell it was the kind of school that would support him in every facet of his student experience, from bar exam preparation to tutoring, to active student organizations.

The commitment to an inclusive culture, along with a task force devoted to diversity, equity and inclusion, were also components Williams felt would give him “confidence in my identity within the legal profession.”

“That’s something that we don't talk about,” Williams said. “They talk about what job you might get and your ability to write and communicate effectively in oral settings coming out of law school. But in some places the environment can get in the way of your ability to learn and focus. That's a really big reason why USF is a great place for me.”

Evidence Professor Katie Moran called him “a joy to be around because he is optimistic, kind, and self-aware.”

“Allen is everything we want law students and future lawyers to be—thoughtful, intellectually curious, and diligent,” Moran said. “He is the embodiment of a growth mindset.”

Williams brought this growth mindset to campus and in partnership with other students, faculty and staff, helped transition the DEI Taskforce into the Anti-Racism, Diversity, Equity and Inclusion Standing Faculty Committee.

“That was a great opportunity to really put at the forefront not just performative allyship, but permanent change within the framework of tenured faculty,” Williams said. “It's important because you don't want to just do the work and then have your work go away. When you leave, you want to have a legacy that remains.”

The list of Williams’ involvement in legal organizations goes on: he’s the social media chair of the Public Interest Law Foundation, a student representative to the Bay Area Lawyers for Individual Freedom Board of Directors, and a staff editor for the Intellectual Property and Technology Law Journal.

Along with his moot court program experience, it’s this last position that Williams credits for his recent professional success, as a blog post he had authored for the journal was a topic discussed during his Reed Smith interview. He encourages other law students to get involved in publishing to capture the attention of prospective employers.

“It gives students an opportunity to really show practitioners what they can do,” Williams said.

With his summer position starting in a few short weeks, he says his goals for the future remain broad.

“I will be a culturally competent lawyer with everything that I do,” Williams said. “What’s really important to me is contemplative lawyering and having empathy for others, but still representing my client to the best of my ability.”