From the NFL to the federal bench, California Court of Appeal Justice Martin J. Jenkins ’80 has made a career of helping others grow 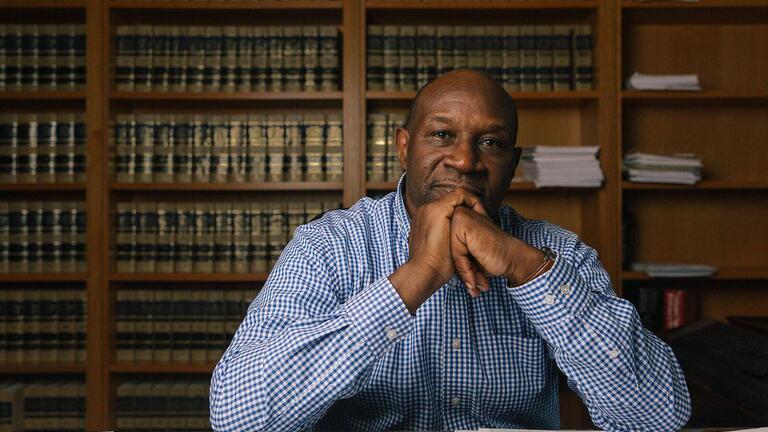 Most judges aren't former pro football players. But Martin Jenkins isn’t most judges. As a rookie cornerback for the Seattle Seahawks back in 1977, Jenkins discovered that getting burned by wide receivers and crushed by running backs wasn’t much fun. He also realized that “if I furthered my education, I could give back.” So he left the NFL and enrolled at the USF School of Law, determined to use law as a vehicle for a life in public service.

Jenkins first became interested in law years before when his mother was injured in an accident. A “competent, humble, and compassionate lawyer” — a USF alum, no less — took her case for free, enabling Jenkins’s mother to pay her medical bills. Then, when Jenkins was in college at Santa Clara, he was unanimously elected as one of four captains of the football team and defended a fellow teammate in a disciplinary action. The dean of students was so impressed with Jenkins in that situation, he told the football coach, Pat Malley, that Jenkins should apply his leadership skills to law. Malley then introduced Jenkins to three African American lawyers “who told me the impact I could make on the community.”

After Jenkins left the Seahawks, USF allowed him to begin law school three weeks into the school year and as part of the Academic Support Program (ASP). He describes ASP as a “safety blanket” that provided extra academic and emotional support.

“I always worked hard but I was not confident,” says Jenkins. “My father was a janitor for 40 years at Coit Tower. My mother was a nurse by trade but didn’t work outside the home when I was growing up. I didn’t know lawyers. I was concerned it was beyond me.” In an effort to stay on top of his studies, Jenkins showed up at professors’ office hours every Friday with a list of questions. “No one turned me away.”

With each of his successes, he’s worked to create in his wake an easier path forward for others.”

It was in those first weeks at USF that former dean Jeffrey Brand, then a visiting law professor and now a superior court judge in Alameda County, first met Jenkins. “He’d just given up a pro football career to come to law school. My discussion with him about that decision is my first vivid memory of a truly remarkable man,” Brand recalls. “At the beginning he had so many self-doubts, but they were misplaced. Marty made the right choice. The community he has so tirelessly served for so long needed him more than the NFL.”

Practicing What You Preach
Giving back to the community — including the USF community — is part of his “natural evolution as a person,” with seeds planted at USF itself, says Jenkins. The law school’s alumni network is like a family, he says. The alums he encountered through the years “suggested doors for me to walk through and were there to greet me on the other side.”

California Supreme Court Justice Ming Chin BA ’64, JD ’67, for example, gave Jenkins the chance to fill a temporary vacancy in the state court of appeal as a young superior court judge, which “broadened my career horizons.” And when Jenkins was nominated for the federal bench, his USF classmates prepared a briefing book to help him prepare for his senate confirmation hearing in Washington, D.C. Stories like this, he says, are countless. Most recently, Jenkins hosted a reunion at his home for about 30 of his law school classmates. A few weeks later, he learned they made a generous donation to the USF Black Law Students Association in his honor. “I was astounded but not surprised as that’s the kind of thing USF alums typically do to support one another or to support one of their classmates’ interests."

USF’s emphasis on ethics resonated with Jenkins, who graduated with honors and was awarded the Judge Harold J. Haley Award for Exceptional Distinction in Scholarship, Character, and Activities. “The curriculum and the values of the Jesuits were certainly present in the way the teachers integrated ethical considerations into classes like constitutional law and torts long before other law schools began doing that,” he says. “The professors promoted values and ethics in the law without proselytizing.”

Jenkins immediately applied those values to his own career. Upon graduation, he became a prosecutor at the Alameda County district attorney’s office and later at the civil rights division of the U.S. Justice Department, where he handled racial violence and police misconduct cases under the tutelage of trial attorney Linda Davis, who headed the division before later becoming a judge. “She demanded excellence from all of the lawyers under her tutelage, while emphasizing the importance of integrity, ethics, compassion, and humility,” he said. “I would not have enjoyed the career I’ve been blessed to have without Linda’s advice and counsel.”

When his mother became ill, Jenkins returned to the Bay Area to work in-house at Pacific Bell. Before long, he was appointed to the Oakland municipal court and then elevated to the Alameda County superior court, eventually becoming the presiding judge of the juvenile division. In 1997, President Bill Clinton appointed Jenkins to the U.S. District Court for the Northern District of California, and he’s served as an associate justice on the California Court of Appeal for the First District in San Francisco since 2008, when he was appointed by Gov. Arnold Schwarzenegger.

“You see in the trajectory of my career that I kind of like problem-solving. I’m a jack of all trades, master of none,” Jenkins quips. Working on everything from criminal cases to contracts to copyright matters “kept my interest and broadened me out.”

Renaissance Man
Although Jenkins has dedicated his career to public service, “serving the public in these roles is really just a starting point,” says Saundra Brown Armstrong ’77, a federal district court judge in the Northern District of California, who has known Jenkins since his first days at USF. “He also serves as a role model and a mentor, which, I think, he sees as the most important role that he fills.”

For 20 years, Jenkins has worked with the youth group at St. Patrick’s Church in Oakland, his congregation. He also helped start Vincent Academy, a K-5 charter school in West Oakland that combines a rigorous academic program and emphasis on the arts with support services for parents. He serves as a mentor with San Francisco Achievers, an organization that provides mentoring and college scholarships to black male high school students in San Francisco, and he speaks regularly to inner city high school and middle school students “about the notion of achievement and impediments,” Jenkins says. “I explain that although I’m a judge, the real learning comes from the journey [to get here], not what I look like now.”

Law is a puzzle. The best days are when I have a case with not much written on the issues and I have to figure it out. I believe that the law should never be too divorced from common sense.”

His dedication to pulling up the next generation extends to those entering the legal profession. Nearly 30 years ago, Jenkins and Armstrong started “fireside chats” for USF law students from underserved communities. “We welcome students into our homes to provide support and talk about anything the students want to talk about,” Armstrong says. “We just want to give them a safe space to talk about their fears and challenges, in a culturally sensitive setting that the students may not find elsewhere.”

Those fireside chats focus on tips for working through the psychological and emotional issues that the first year of law school presents to minority and disadvantaged students. “[Other] alums share their own personal experiences at USF and it turns out to be an extremely empowering evening for the students and alums,” Jenkins says. Topics range from acclimating to school and living alone to dealing with personal and family issues, says Armstrong. “There’s nothing mystical about our journey — we’re not better or worse than anyone else. We show them that others are invested in their success.” Attendees of those fireside chats have gone on to careers as law firm lawyers, public defenders, prosecutors, and even judges. “The program has been so successful that we’ve created another group for new attorneys,” she says.

Mentorship makes Jenkins a living embodiment of USF’s core values, Armstrong says. “He subscribes to the reality that we are merely stewards of these positions and it is incumbent upon us to do what we can to prepare the next generation to succeed us. With each of his successes, he’s worked to create in his wake an easier path forward for others. For him, success is not driven by greed or pride, but by a sense of duty. The idea of looking outward, not inward — that is Marty to a T.”

Level Head, Broad Mind
When it comes to his work on the bench, Jenkins says he doesn’t have favorite cases, though he does have an affinity for commercial litigation, and finds criminal cases and juvenile cases involving issues of dependency and neglect the most challenging. “Law is a puzzle,” he says. “The best days are when I have a case with not much written on the issues and I have to figure it out. For example, with policy issues, what did the legislature really mean? I believe that the law should never be too divorced from common sense.”

That’s probably why Armstrong calls Jenkins “a thinking judge.” His judicial temperament is “beyond reproach,” she explains. “He presides and decides in an open-minded, even- tempered, courteous, patient, and compassionate manner. He has no personal interest or ego investment in any of the decisions — they’re based precisely on his view of the law and the facts. He’s not haunted or immobilized by the fear of being wrong, nor is he struck with a sense of his own immutable correctness. What’s important to him is achieving results that are just. That’s the quality of an excellent judge.”

In recognition of his distinguished public service and dedication to his church, community, and family, in 1998 Jenkins was awarded the St. Thomas More Award by the St. Thomas More Society of San Francisco, an organization of Catholic lawyers and judges. Indeed, Jenkins has been close to his family his whole life. A native San Franciscan raised in the Lakeview neighborhood, Jenkins lived at home while a student at USF and also during his first two years at the District Attorney’s office. Though his mother passed away in 1992 and his father in 2005, both got to see some measure of his professional success. Today, he remains close to his siblings, a younger sister who works in human resources and an older brother who is a retired NFL referee.

Jeffrey Brand describes Jenkins as passionate, brilliant, hardworking, humble, generous, and inspiring. “If Marty saw these words, he’d deny them and I'm sure be embarrassed,” Brand says. “But when it comes to decent, caring, compassionate human beings, he is among the first who come to mind.”