Joseph Rocha never wavered in his love of serving his country. Even after he was discharged from the United States Navy in 2007 for being gay, he didn’t give up.

Instead, Joseph became a national activist for the repeal of the “Don’t Ask, Don’t Tell” policy, writing editorials for The Washington Post and testifying in the successful federal court challenge to the policy, Log Cabin Republicans v. United States. Joseph spoke extensively, both in court and in the media, about the hazing he endured while serving overseas. His story gained attention in large part because he always vowed to rejoin the service if allowed.

Joseph kept that promise. Now commissioned as a lieutenant in the U.S. Marine Corps, Joseph will once again be a full-time member of the military after graduating from USF School of Law in May 2016. This time, he’ll be a judge advocate, using his USF education to help ensure the Marine Corps stands for the values it espouses.

My desires for justice, human dignity, and social justice have all been fostered here. I felt very strongly about those things before and now they have been sharpened in a professional way.” 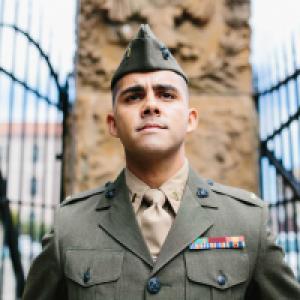 “As a judge advocate I have the opportunity to increase the feeling of pride, fellowship, and common loyalty amongst Marines by ensuring that our actions as an institution and as individual Marines reflect our core values of honor, courage and commitment,” Joseph says. “In doing this, we uphold the integrity of the Marine Corps and protect the rights of the men and women who serve in it.”

Joseph was inspired to attend law school after his experience as an activist — and realizing that activism can only go so far; eventually, attorneys must help cement those desired changes into law. When it came time to choose a law school, USF topped the list.

“It’s extremely important to me to see the education being put in the context of a passion for justice and always doing what is right, even when it’s hard,” Joseph says. “USF instills a great sense of moral character and fairness in its students that I believe reflects my duty as a Marine judge advocate. That’s why I chose USF.”

USF, Joseph says, is giving him solid legal training not just in the classroom, but also outside it with a variety of practical experiences. All of that will help him as a military leader, he says.

The No. 1 thing I’ve gained from USF is confidence. Through all this hard work and exposure to practical experience, I’ve gained the confidence to know that I can help implement and move forward on a larger scale the values that I hold.”

“When I began law school, I had a lot of raw ambition and optimism that’s been refined and now supported by confidence in my skills,” Joseph says. “I know I can be persuasive. I know I can convince a judge. I know that I can interpret the law and that I can analyze fact patterns. Through the federal court challenge, I realized that no matter how many people are convinced that something is wrong, only the law can actually make it right."

“After being at USF, I’ve felt the shift from being an activist to being a professional, and I think that’s really encouraging. As I pursue a career dedicated to justice, I am convinced I have acquired the skills required to hold my ground in rooms where I might have been dismissed in the past even though what I was supporting was right.”