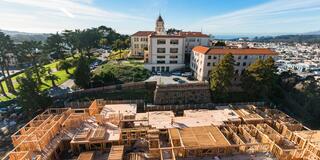 By summer, students, faculty, and staff will be able to enjoy the new Lone Mountain dining hall, featuring a pizza oven, a coffee bar, and space for 300.

The dining hall, with sweeping views of the city, is expected to be completed by June or July 2020, said J. J. Thorp of facilities management. The space (located in the area once occupied by Wolf & Kettle Cafe and the adjacent lawn) will also have taps for beer and wine, although it’s unclear if there will be regular bar service, Thorp said, adding that the name of the dining hall has not been decided.

Other areas on campus are changing, too. Here are updates on several major construction projects underway on campus.

Much of the construction of the new residence hall, composed of two adjoining buildings with room for 600 students, is expected to be completed by December 2020. Students will move into the residence hall in August 2021, once the buildings are completed and furnished, Thorp said. The new hall will house continuing students, primarily sophomores, said Torry Brouillard-Bruce, senior director of Student Housing.

The residential units will have kitchens, and the buildings will also include two classrooms, laundry facilities, bike parking, and underground parking for the university community. The name of the new residence hall has not been decided.

There will be four courtyards, as well as common spaces that can be used as game rooms, music rooms, and lounges. The courtyards will have themes: a contemplative space, an art space, an active/play space, and a green space.

Offices on the first floor of Harney Science have been moved to Kalmanovitz Hall, and demolition has begun as the first step of creating a maker space called the Innovation Hive. Designed to support the new engineering program, it includes an “ideation space,” where students can gather and brainstorm on projects, as well as working spaces equipped with 3D printers, power tools, and other equipment.

The Innovation Hive, targeted for completion by June 2020, is primarily in service of the new engineering program but will be available to all USF students, faculty, and staff.

Excavation is complete and construction continues to add a premium seating level, a hall of fame, and a multipurpose space to the gymnasium. Completion is expected in June or July 2020, Thorp said.

Once complete, the Sobrato Center will be the home court for USF basketball and volleyball games, and it will also provide space for large-scale gatherings, including the Silk Speaker Series.