Grace in the Aftermath

In January, during intersession, John Iosefo ’21 and 18 other students visited Northern Ireland as part of USF’s Erasmus Community, a year-long living-learning program that this year explored conflict in the fall and is focusing on resolution in the spring. Professors Keally McBride and Peter Novak led the students on an immersion tour in which they studied the Northern Ireland conflict of the 1960s through the 1990s. Here are some of John’s reflections on the tour.

So we’re all gathered in this conference room in Derry, a city in northwestern Northern Ireland. We’re sitting in a circle with three guest speakers. One is an elderly woman, Protestant, whose husband was kidnapped and killed by the Irish Republican Army (IRA). One is a man, a police officer, Protestant, recently retired. One is a woman, Catholic, who ferried guns and explosives for the IRA in the 1990s.

We first watch our guests speak on videos that were produced as part of Theater of Witness, a project that enables people who lived through this conflict to share their memories so that they can heal and also so that we can learn from them.

In the first video, the elderly woman describes one day when the IRA burst into her home and seized her husband. They put him in a van loaded with explosives and forced him to drive to a British Army post. When he reached the gates, they detonated the explosives.

In the second video, the police officer says that because he works for the Royal Ulster Constabulary, Catholics hate him. And Protestants think that he should work for them alone, protecting them from Catholics. He just wants to serve the whole civilian population.

In the third video, the woman who ferried guns for the IRA tells how much she loathed Protestants. “I’m a Catholic minority. I’m disenfranchised. I can’t vote in local elections.” But one day, when she was delivering explosives to blow up Protestant troops, she paused and asked herself: What’s the point of this violence? Decades of broken people and no resolution in sight.

After we watched the videos, we asked our guest speakers questions. The three of them sat right next to each other in our circle of chairs. I studied their faces. I looked and listened for bitterness or anger. But all I saw was shared sorrow and shared respect.

After our visit, we had some free time to explore Derry. It was cold outside, so some classmates and I walked to a shopping mall so I could buy a hat and a scarf. We’re walking along, dodging schoolchildren in their school uniforms — green for Catholic schools and blue for Protestant schools, all mixed together. And then I see the elderly woman and the younger woman — the Protestant widow and the former IRA gun runner. They’re walking through this mall, chatting and smiling and holding hands. The younger woman might have delivered the explosives that killed the older woman’s husband.

The one thing that I’ve learned the most in the Erasmus Community? Maybe I’m wrong. Maybe my opponent is onto something. Maybe I should check my assumptions and think again. If I have enough empathy, I can’t see you as the “other.”

As told to Evan Elliot 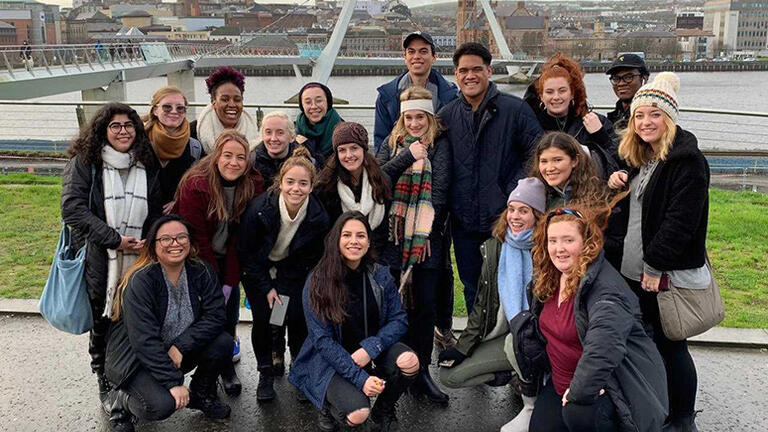 Group of students an Erasmus Immersion in Northern Ireland