Master of Science in Organizational Development (MSOD) student Cassandra Beverly is the subject of this recent video made by Kaiser Permanente. The video is intended to showcase the most accomplished and prominent of Kaiser’s employees who partake in Kaiser’s educational programs. The video focuses on a “day in the life” of Cassandra, who works full-time, is getting her Master’s degree, and is also a single mother.

Cassandra has been working for Kaiser for 12 years, and has been partaking in Kaiser’s educational programs since 2008. She worked her way up through community college to a Bachelor's degree and now on to a Master’s degree, both from the University of San Francisco’s School of Management. “I’ve been through all the programs they have to offer,” she said. Kaiser encourages its employees to seek further degrees while still working full-time. Through a union program called the Ben Hudnall Memorial Trust, student employees receive a $1000 per quarter for books or classes, and any income missed for hours in school is supplemented. “They were also very flexible with work hours if I needed to shift things around for a class, test or project,” she said.

Her drive to succeed is evidenced by her numerous accomplishments. In 2011, Cassandra won a $2500 scholarship through the Phi Theta Kappa honor society and her community college, Merritt College. Every year, 1600 students are nominated for the All-USA Community College Academic Team, and only 20 are selected. Winners are selected based on a combination of academic achievement and community service. Shortly thereafter, Cassandra started at the University of San Francisco and earned her Bachelor of Science in Organizational Behavior and Leadership in 2012. She went on to the Master of Science in Organizational Development (MSOD) program and is graduating this May. “I’m a single mother, I was a teen mother, and then having come to this point, I can see where I’m at now,” Cassandra said.

After 11 years in Kaiser’s Occupational Health Department, Cassandra applied for the position of Northern California Workplace Safety Labor Liaison and got the job. “I think I did get this job because of my degrees,” she said. “I wouldn’t have considered applying for a job like this if it wasn’t for my education.”

Kaiser’s video aims to capture the experience of going to school and being a USF student while also working full-time. “A video crew followed me around for days,” Cassandra said. “They came to my house, interviewed my children, interviewed me at work, filmed meetings I was in, and they interviewed the first manager I worked with through this program. After work they followed me to campus, the library, into classrooms. Kaiser worked closely with the USF School of Management, who very kindly set up all necessary accommodations for us to be able to go in and do this project.”

“This project has given me a greater sense of pride in myself,” said Cassandra. “You don’t tend to think about what your average day is like. Being followed around by a camera crew, making the video, it gave me a moment of reflection. I thought, oh yes, that’s right, I am doing this, and it’s pretty amazing that all of these people have supported me through everything.”

Cassandra said that one of the nicest things about this project was listening to her kids being interviewed and hearing them express what they thought of her accomplishments.Cassandra’s kids, who are 16 and 13 years old, were very impressed with the fact that their mother was the subject of a project like this. “My kids already think I’m kind of a genius superstar,” said Cassandra, “because I went from being a teenage mother to having a Master’s degree.”

“They talked about me instilling in them that they can do whatever they want,” said Cassandra, “to be the best that you can be in whatever it is that you’re doing. It was very moving to hear them say that.”

“I’m the first person in my family to graduate from high school, let alone college, let alone a Master’s program. As I was doing it, it became bigger than getting a better job; it became a movement, something I felt I had to change in my family. I kicked in every single door, and now all my kids have to do is walk through it.” 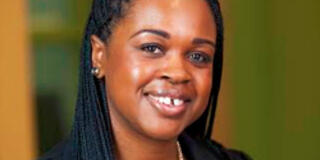