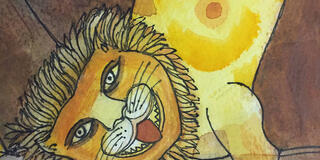 These works on paper use myth making as a means to cultivate dialogue, ranging from political and socioeconomic issues to the struggle of balancing tradition and modernity as artists shift to a global audience. Created between 1965 and 2008 by South Asian artists, the works in Modern Myth introduce viewers to artists responding to historical transformations from decolonization to online auction houses, demonstrating that mythology is not exclusive to ancient traditions, but a means to adapt to contemporary experiences.

Modern Myth includes works from 20 different artists from India and Pakistan, including internationally recognized artists Anita Dube, Jamini Roy, K. G. Subramanyan, Nilima Sheikh, and Muhammad Zeeshan. Using modern approaches to classic media, including photography, pen, ink, and pastel on paper, these artists showcase not only the diversity of cultures throughout South Asia, but how mythology and the practice of myth making are still essential tools of communication.

Modern Myth was curated and produced by graduate students in the University of San Francisco’s MA in Museum Studies Curatorial Practicum class led by John Zarobell, in collaboration with Bay Area collectors Dipti and Rakesh Mathur and Anita and Sridar Iyengar.