With dedication and heart, more than 200 Lone Mountain alumnae have made a major investment in future teachers who share their passion for service.

Created in 2004 and endowed in 2006, the Lone Mountain Legacy Endowed Scholarship supports graduate students in USF’s School of Education. Alumnae built it in tribute to the Religious of the Sacred Heart, a society of nuns known for their deep devotion to education. Before the Jesuits purchased Lone Mountain College in 1978, the RSCJ taught generations of Bay Area women on the Hilltop and at the school’s prior home in Atherton.

Less than two years ago, the alumnae embarked on a campaign to grow the scholarship’s endowment. They increased the scholarship fund from approximately $650,000 to approximately $2 million, through a combination of gifts and pledges. That achievement will allow more deserving students to benefit from larger scholarships.

In doing so, the scholarship also honors the life’s work of many Lone Mountain alumnae, who forged long careers in teaching.

“When you look around the city of San Francisco and into the heart of the public schools, you would be amazed at the number of women who were trained at Lone Mountain, and later USF, to be credentialed to be teachers,” says donor Shirley Connolly ’58, MA ’66. “Public servants and educators really develop a community — and that’s what USF continues to contribute to.”

“The generosity of these scholarship donors will provide aspiring and practicing teachers with access to an education that will empower them to make a lasting difference — here in our local communities, and beyond,” says Kevin Kumashiro, Dean of the School of Education.

Connolly, who taught in local Catholic schools before moving into education administration, is a longtime member of the board of the Alumnae of Sacred Heart Lone Mountain. She attributes the campaign’s success to a combination of formal efforts and informal conversations among longtime friends, relatives, and neighbors, all of whom motivated each other to give.

Inside the School of Education, 15 students have already benefited from the Lone Mountain Legacy Endowed Scholarship. Thanks to the strength of the recent campaign, the collective action of these alumnae will matter for generations to come.

“The generosity of these scholarship donors will provide aspiring and practicing teachers with access to an education that will empower them to make a lasting difference — here in our local communities, and beyond,” says Kevin Kumashiro, Dean of the School of Education.

In her own years as a day student and later boarder at Lone Mountain College, Connolly remembers making “wonderful friends.” Her favorite memories include pouring over rare books in the Lone Mountain Library (now the Del Santo Reading Room) after one of the nuns encouraged her to write her master’s dissertation on an aspect of California history.

Above all else, affection for the nuns who operated the school unites Lone Mountain alumnae and continues to inspire their generosity.

“It’s the history they gave us, the values they gave us, and who they quietly were. They didn’t stand on soapboxes and shake their fingers at us. But they were strong,” says Connolly. “There’s been a great relationship between Lone Mountain and the Jesuits and the RSCJ. To see that it’s coming together on campus, and will continue to do so — that’s the important thing.” 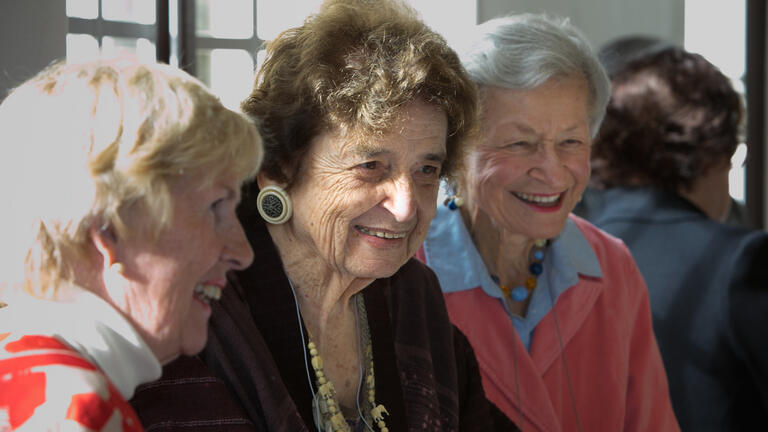