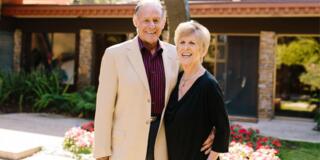 In 2015, John A. and Susan Sobrato made a historical $15 million gift to launch the renovation of what was then known as War Memorial Gym. Six years later, as the transformation nears completion, the newly designed Sobrato Center has taken the stage, boasting state-of-the-art athletics facilities and a multi-use center that will benefit the entire USF community.

In addition to modernizing the building's overall look, the renovation also includes upgraded weight and training facilities and the addition of the John A. and Sue Sobrato Club Level, featuring premium event seating and hospitality.

The building’s entrance was also repositioned closer to the center of campus, which will help integrate the facility into university life and encourage more students to take advantage of everything the building has to offer.

According to Brandon Graves, USF’s associate athletic director of Development, these campus transformations shine a light on the donors’ generosity.

“To have these plans finally meet realization is fulfilling and exciting for the university. None of this happens without donor support,” Graves said. “We have people in our community, in the Bay Area and abroad, who care about the success of our students and who are willing to make philanthropic commitments to ensure that our students have all the tools to succeed.”

Lindsey McClenahan, interim vice president of Development, added, “The new Sobrato Center will have an endless impact on recruiting for admissions, building the community on campus, and engaging students, alumni, and friends alike. It will be the front porch of the university as part of our main athletics facility and serve as a primary event venue during games and beyond.”

A Step Back In Time

The Sobrato Center has stood witness to more than six decades of history at the university. During that time, USF underwent countless changes, garnering strong accolades and distinctions across the globe.

Before the onset of the pandemic, the facility helped USF welcome notable leaders and national icons for the Silk Speaker Series, which featured individuals including Magic Johnson, Billie Jean King, and Steve Wozniak.

Joan McDermott, USF’s director of athletics, also remembered growing up and standing in awe of War Memorial Gym as a child and into her time as an undergraduate student at the university.

“It’s a really cool, old building. There’s a lot of tradition from the past,” McDermott said. “To be able to honor that past, tie it in, and make it much more modern — it’s just really great for everyone. When people come in for the first time, I want them to feel that.”

Elevating Athletics and Rising Up As A Community

As the university prepares to welcome students back to campus in the fall, the athletics department hopes that the Sobrato Center will provide a special opportunity to bring together the university as a whole.

The Sobrato Center’s reconstruction is one of many of the advancements taking place at the Hilltop, and USF is proud to be the home of such a contemporary, cutting-edge institution.

With the help of the university’s committed donors and the forward-thinking power of the community, USF will continue to flourish and expand into the future.

“There’s tremendous support building at USF. The more that we can build on the momentum given by donors and pair it with the impact that we can have on students — The sky is the limit,” Graves said.

To help further campus transformations like these, consider making a gift in support of USF Athletics and Changing the World From Here: Campaign for the University of San Francisco.