Serena Williams Talks About Tennis, Equality, and Love With USF 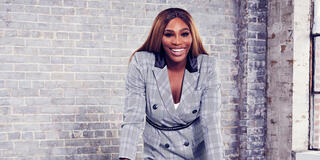 In an interview with USF March 10, Serena Williams talked about life off the court: motherhood (her daughter, Olympia, is 3), women’s pay, art, and her business interests.

One topic she is passionate about is equal pay for women.

“It’s kind of shameful that some things are so off, in sports, of course, but in business why wouldn’t you get equal pay? You’re doing the exact same job,” Williams said.

“How do you explain to your daughter that she won’t get paid as much as your son?” she asked.

More than 4,000 people registered to watch the Williams interview with Jennifer Azzi, associate vice president of engagement at USF. Williams is the latest speaker in the Silk Speaker Series at the University of San Francisco. The discussion was broadcast on YouTube and Facebook because of the pandemic.

Williams was introduced by Azaria Hayes ’23, a member of the USF tennis team and a psychology major, who called Williams her “personal and professional hero on and off the court.”

Asked if she had any advice for students, Williams said it’s important to always be prepared.

“It’s like if you study for a test, you’re feeling pretty good. That’s how I look at my game. I don’t want to cram for it,” she said.

“My dad always said if you fail to prepare, you are preparing to fail.”