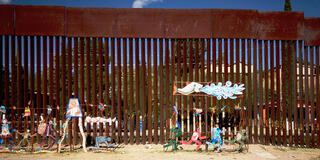 Over the summer Stephanie Amaya MA ’19, along with three other students and two professors from USF’s Marriage and Family Therapy program, flew to McAllen, Texas to assist undocumented immigrants who had just been released from a detention facility. The trip was part of an educational partnership with Catholic Charities.

The immigrants — including many who’d undergone dangerous and traumatic journeys to get to the U.S. — were awaiting hearings that would determine whether they’d receive asylum or be deported.

Why did you go to McAllen?

As counseling students, we wanted to help a community in need — to help people who had been through a lot.

What did you do?

We worked at a respite center that provides services for asylum-seekers who’ve just been released by Border Patrol. The center helps immigrants purchase bus tickets to join family in the U.S. while they await their asylum hearings.

We served people food, gave them clothes, and accompanied them to the bus station. We also sat and listened to their stories, allowing them to express their fear and anxiety. It wasn’t traditional therapy, but we hope it helped people begin to process their trauma.

What did immigrants tell you about the detention center?

Children over the age of 10 were separated from their parents and kept on different sides of the detention center. Many parents had no idea where their children were.

One young mother said that she was kept with her 4-year-old daughter in what she and other immigrants called “the refrigerator room.” She talked about how cold it was. That’s where they slept — on concrete. The blankets were Mylar, and didn’t keep them warm. She recalled not being able to sleep because the fluorescent lights were turned on 24 hours.

Did the trip prepare you for a career in counseling? How?

I learned that healing doesn’t have to come from traditional therapy. We had conversations with people and played with kids, and they opened themselves up to us. It doesn’t have to be “face-to-face sitting down in a room doing therapy” for it to be effective.

I also got to practice some of the skills I’m learning in class. For example: being able to listen to peoples’ stories and draw the line between what’s mine and what’s theirs. My parents are both immigrants. I had to sit there with my own biases and experiences; I had to listen to these immigrants’ stories without being triggered by my own history.