Noah Berrios ’22 was a practicing Buddhist throughout high school, but even he had trouble meditating for 40 minutes as part of a class at USF.

Sitting on a cushion with his eyes half-closed, he tried to empty his mind and focus on his breathing. But outside noises kept intruding into his thoughts — he heard owls hooting, small animals rustling, and the wind carrying seeds that dropped through a crack in the ceiling onto the floor where Berrios sat.

He was with his class, a first-year seminar called Buddhisms in San Francisco, on an overnight retreat to the Sonoma Mountain Zen Center — and their meditation had begun at 5:10 a.m. The curriculum combined readings from scholarly texts and magazines such as Harper’s and The Atlantic, field trips to local Buddhist temples, and the retreat.

Professor John Nelson was impressed that all 13 students completed each of the five 40-minute sessions.

“They found it empowering to be able to avoid reaching for their phones until 10:30 that morning, when it was all over,” he says. “They deserve to be proud of themselves.”

First-year seminars ease new students into life at USF, and into life in the Bay Area, in thought-provoking ways.

In Food and Farming in San Francisco, for instance, students visit places like the Ferry Plaza Farmers Market along the Embarcadero in San Francisco. In Identity Rhetorics, students explore identity labels such as “woman,” “man,” “American,” and “techie” and learn how labels are used, construed, and sometimes abused.

The idea behind first-year seminars, says Berrios, is to think, question, and reconsider. “Maybe I can’t change the whole world, but I can change my own world.” 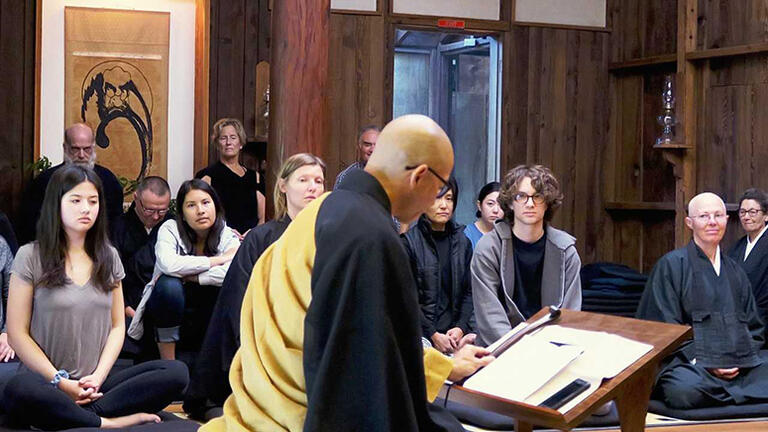