Frustrated when she couldn't find a children's book to explain her return to work to her young kids, a law professor wrote her own
February 25, 2019
Share Copy Facebook Twitter LinkedIn Email

Michelle Travis relished spending time with her two daughters during her maternity leaves, but she also looked forward to returning to her job as a USF law professor. When it was time for Travis to go back to work, she searched for children’s picture books that might help her daughters with the transition.

“I was looking for something that painted working moms in a positive and inspiring light, that would help my kids be curious about the work I did outside the house, and encourage them to be proud of that work,” said Travis, who focuses her teaching and research on employment law, employment discrimination, and work/family balance.

But in a search that she called “both frustrating and illuminating,” Travis discovered that most books painted working mothers in a negative light, focusing on how children could cope without their mother present during the day, as if the mother’s job was a detriment. Travis says she even found a few books where the working mother was a witch, as opposed to having a real-life job.

The experience stayed with her as her daughters grew, and as she witnessed her USF law students balancing school and eventual careers with motherhood. So she decided to write a book of her own to change the narrative.

Travis’ picture book, My Mom Has Two Jobs, published in July 2018 and recipient of a 2019 Independent Publisher Book Award, depicts how moms care for their children while also making the world a better place through their careers. The book features a range of occupations, such as doctors, engineers, police officers, secretaries, and waitresses, as well as diverse ethnicities.

“As a lawyer and law professor, I believe that the law is a very powerful tool in advancing women’s equality, but I realized that I need to get to children before our stereotypes about working moms are fully established and start disrupting that,” Travis said.

From her own experience and research, Travis knows that working moms are more likely to be passed over for promotions or seen as less competent by colleagues at work. Outside the office, they deal with guilt for how they balance work and motherhood, as well as perceived judgment from people who think they should be with their children full time.

In the law school, Travis is an adviser to the Parents and Advocates Law Student Association (PALSA), a group that aims to make law student parents and their children feel welcome on campus and promote parental/familial rights and support.

Lizett Rodriguez ’18 — who carried her sleeping daughter to lectures after giving birth during her second year of law school — was one of the founding members of PALSA. She says she looks up to Travis as both a lawyer and a mom.

“When my husband and I were thinking about having a child, I actually spoke to her and asked when the right time was,” Rodriguez said. “And she told me that there is no perfect time, and it is different for everyone. Professor Travis inspired me and told me, ‘Don’t let anybody tell you that you can’t do something because you are a woman of color, or because you decide to take on motherhood.’”

Today, Rodriguez is a fellow with California Rural Legal Assistance, a nonprofit that supports migrant workers and the rural poor, in her hometown of Watsonville, California. And her daughter, Lexie, is a thriving 2-year-old who loves Travis’ book. 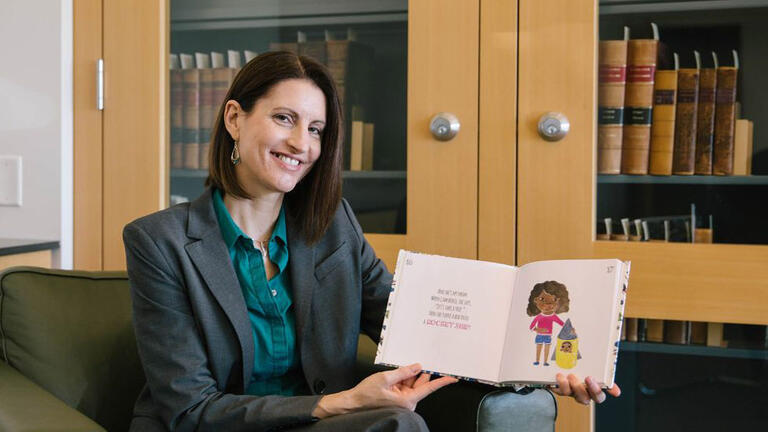