One Woman’s Path From Liberian Village to Chief Operations Officer

Inez Wondeh, Executive MBA ‘12, from a child growing up in a Liberian village to working as Chief Operations Officer, discovered her way to change the world at the University of San Francisco. Over the past decade, Inez has worked her way up in the healthcare industry and now works as the Operations Director and Acting COO at Golden Gate Urology. “The EMBA program changed my life. This program taught me the tools to ask questions, look at a problem and solve it. This school has been at the crux of all of my professional and many of my personal accomplishments,” Wondeh said.

Raised in New Georgia, Liberia, Wondeh lived in a household of seven other children, where there was often not enough food to eat and gun shots were commonly heard outside. Her father had an eighth grade education and worked as a housekeeper for a German family. Her mother worked as a homemaker, and later as a sales representative to help support the family. Most young girls were expected to be placed in arranged marriages, but Wondeh, with her slender build, was often passed up, as it was a common belief she wouldn’t be able to have children. “Perhaps, having witnessed arranged marriages, I was left thinking that I would be next in line to save the family. I started to think my only way out was to leave Liberia or get an education,” Wondeh explained.

In the late 1980s, Wondeh, along with her mother and other siblings, immigrated to the United States. She seemed to suffer one setback after another: having to repeat multiple grades, as her high school diploma from Liberia was not accepted, then finally attending a community college where she was advised it may not be wise to finish her education at all due to her heavy accent. Wondeh grew frustrated and considered giving up. Fortunately, with the help of another educator, Wondeh completed her A.S. in Social Behavioral Science and received a degree in Business Management. “I liked being in charge of people. Business management was perfect because the more I thought about it, the more I realized how this bachelor degree would help me give back. I could see how I could be a mentor to someone just like me and able to say to them that I started at the same place they did. I could lift them up.”

After earning her Masters in Public Administration with a concentration in Health Services Administration at USF in 2008, she noticed a dramatic change in her management skills. “I was more assertive. It really taught me how to be a manager. Life for me improved dramatically,” she said. Yet, something was missing. One day, during a board meeting, a colleague suggested that she pursue an MBA. At first, Wondeh questioned the need to get a second master’s degree. Over time, however, it became clear that obtaining an MBA would push her to a new level in her professional career. “I realized, with the way that healthcare was headed in terms of finance, I needed a stronger foundation to pull from,” Wondeh said.

When Wondeh shadowed the Operations class in the EMBA program, she immediately knew an advanced business degree would boost her career. The professor talked about Queuing Theory called Little’s Law and explained the concept to his students by using the real world example of predicting hospital beds and wait times for patients. For the next three months, Wondeh applied what she learned from that one class to her job in healthcare and found great success. She completed the EMBA program in 2012 and received the Dean’s Honors Award for Outstanding Student Leader. Wondeh is the first of seven generations to receive a graduate degree. The path she took, however, was not always smooth or easy. With her perseverance and generous spirit, Wondeh never stopped fighting for what she sought to accomplish.

“There’s a great quote by Maya Angelou that says, ‘When you learn, teach, when you get, give.’ I believe in that. I believe that we should help lift people to their fullest potential.” 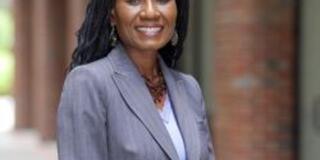