“In commodity markets all that matters is the price,” said Dr. Roth, “it affects and regulates everything. What I’m interested is the non-commodity markets, the markets where price doesn’t do all the work. Where the value and goods exchanged between two parties isn’t money. Markets like universities, labor markets, organ donation, marriage and spousal choice – markets where you have to choose and be chosen. Where there is courtship on both sides.”

Throughout his career, Dr. Roth has helped redesign matching systems and mechanisms for the selection of medical residents, New York City high school students, Boston primary school students, and other non-commodity market scenarios. He successfully redesigned the medical residency selection program to account for individuals as well as married couples looking to be placed together. Dr. Roth is one of the founders of the New England Program for Kidney Exchange, a registry program that pairs compatible live kidney donors with their recipients. “The kidney exchange market is an interesting one,” said Dr. Roth. “It’s a costly market, but the organs are not for sale. The care for end-stage renal disease patients is a $50 billion a year industry in the U.S. There is a huge shortage of kidneys; the list of people waiting for a kidney from a deceased donor is more than 100,000 people long. But in reality, there isn’t a kidney shortage at all, because we all have two and could live with one. The trouble is finding the right recipient for your organ, which because of all sorts of medical particularities usually isn’t the loved one you’d like to donate a kidney to.”

A common solution in the Kidney Exchange Program is a pair-exchange, in which two couples come together to provide healthy kidneys to their sick counterparts. Matching couples based on medical compatibility prevents those two donees from having to wait for years for an organ from a non-living donor. Because there are no legal contracts for organs, the “in-kind exchange” between two couples requires four simultaneous surgeries, with four surgical teams working on the donors and donees at the same time. This ensures both donees receive their organs without the fear of one party backing out after only one complete transplant. A three-way exchange, between three matched couples, requires six surgical teams and six operating rooms to be available simultaneously. In 2008, a six-way kidney exchange was performed simultaneously, with twelve surgeries happening at the same time.

“Simultaneous transplant surgeries cause a lot of congestion in hospitals,” said Dr. Roth. “It’s hard to plan for that many surgical teams to be available at the same time, and it’s expensive. One solution to this problem is a non-directed donor chain, which consists of a deceased donor or a voluntary living non-directed donor, and a series of couples. The voluntary donor gives a kidney to couple A, couple A gives a kidney to couple B, couple B to couple C, and so on for as long as medical matching will allow. This eliminates the need for simultaneous surgeries because the first donor isn’t part of a couple that needs to get something back, so the surgeries can be done one at a time. It’s an altruistic chain. We did one with thirty-six people last year, a chain that started with one voluntary donor. It was great.”

Alvin Roth’s approach to economics has the potential for great impact. He implements the theories he studied for years as an academician to practical real-world problems. “In all market design, we’re just trying to make the world better through good economics,” said Dr. Roth, “not as perfect as in a perfect world where there would be enough healthy organs to go around, but better systems within this imperfect world.” Dr. Roth’s economics continue to change systems that greatly affect people’s lives. It’s not surprising that people showed up en masse to hear his story.

Dr. Roth filled the Xavier Auditorium at the University of San Francisco with his fascinating story. Students and faculty showed up in hundreds, not only filling the seats but lining the walls and listening in the wings. 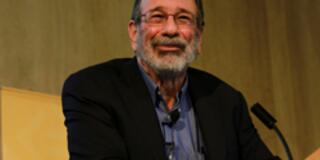