Ending Violence in the Classroom in Sub-Saharan Africa

by School of Management, Organizational Development 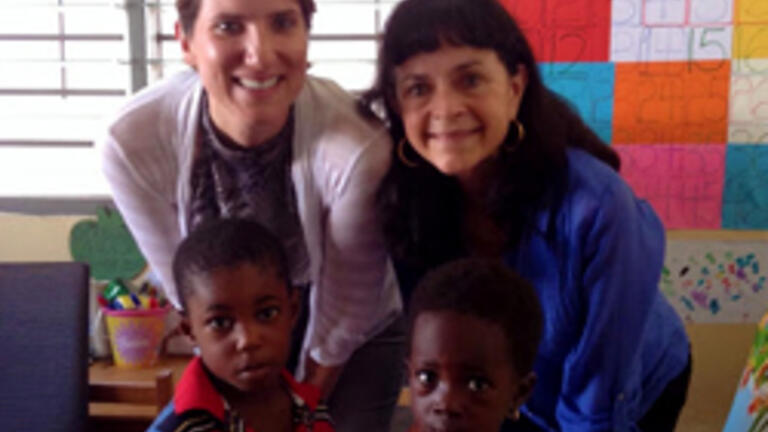 Melanie C. Jones and Giulietta Pezzaniti, USF Master of Science in Organizational Development (MSOD) '14 alumni, embarked on a twenty-one-day journey to end violence in the classroom against children in Sub-Saharan Africa.

Jones is the founder and director of Speak To Children, a nonprofit organization whose mission is to provide education and support to parents, teachers, and children by reinforcing basic values that foster self-awareness and character development in the child.

The lessons are based on core ethical values that address the student on intellectual and emotional levels and are centered on six topics which include appreciation, sharing, conscience, choices, differences, and self-esteem.

“At its core, the program is about connectedness,” Jones explains. “Speak To Children helps students and teachers connect with themselves and with one another. Connectedness is critical but I am also giving educators the tools to not only teach children to flourish while learning but to create a harmonious classroom culture.”

Children may experience psychological harm and its effects can last from days to years. This violence impacts educational attainment, diminishing the returns of education for every affected child. It causes non-attendance and dropping out, as well as a considerable financial drain on society. Children who experience violence at school are likely to earn less, be in greater need of healthcare and other services, and contribute less to their countries’ economies. They traveled to Ghana, Zimbabwe, and Kenya to deliver Speak To Children’s curriculum-based program.

Since 1999, Jones has devoted herself full time to the character building education program for youth and has traveled expansively nationwide. During the MSOD program, however, Jones and Pezzaniti became close friends and shared similar passions. Jones invited Pezzaniti to help facilitate the Speak To Children program in Africa. “Flying to Ghana, we had no idea what it was going to be like. Each classroom had wooden desks, a chalkboard and a stick which we believed they used to establish order in the classroom. In fact, at one of the schools we visited, we actually witnessed a teacher hitting children with a stick. We were shocked. That teacher was not part of our training, but it made us think about how common that form of discipline is in schools. We reflected on how the program could change the teacher's behavior. The next step is to encourage the teachers to use Speak To Children's program as the alternative to using corporal punishment. By presenting teachers with this program, we are essentially going through the back door. We aren’t accusing them of corporal punishment, but rather we are giving them this program as a gift by framing it as an opportunity to connect more deeply with one another.”

According to Learn Without Fear, a global campaign against violence in schools, there remains a problem all over the world, affecting millions of children, every day. At present, 77 countries still allow teachers to punish children physically, and the practice is still widely used and accepted – even in countries where the practice has been officially been banned from schools. Millions of children are exposed to physical assault at school. The most frequent victims of corporal punishment are boys, children with disabilities, and children from minority ethnic groups. While teachers’ reasons for beating children are often minor, the consequences are not.

Jones and Pezzaniti believe that educational environments must be safe, healthy and protective, endowed with trained teachers, adequate resources and appropriate physical, emotional and social conditions for learning. Within them, children’s rights must be protected and their voices must be heard. Learning environments must be a haven for children to learn and grow, with an innate respect for their identities and varied needs. Speak To Children’s program promotes inclusiveness, gender-sensitivity, tolerance, dignity, and personal empowerment. Jones has a saying, “First into their minds, then their hearts and then their behavior.” She believes it is crucial to involve children in their learning otherwise there is no ownership. 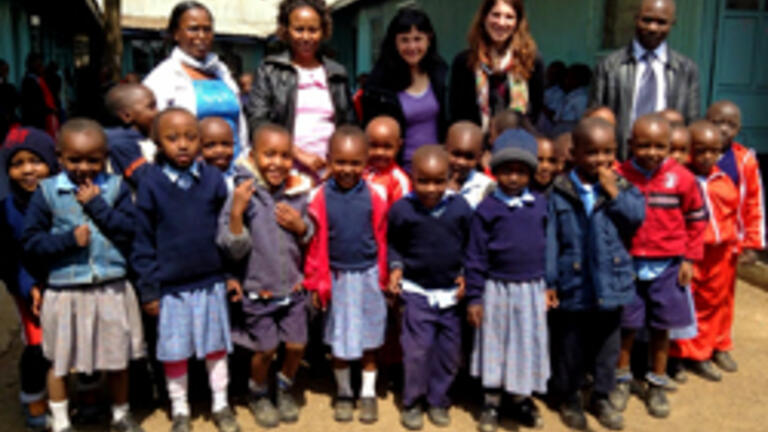 Jones and Pezzaniti began leading their training sessions in Accra, Ghana, to over 80 educators, after which Jones and Pezzaniti observed the teachers using the program with children in their classrooms. At each of the location, following the same format, they partnered with the International Child Resource Institute (ICRI), an organization that works to improve the lives of children and families around the world. ICRI focus on early childhood care and education, children’s rights, empowerment of women and girls, maternal/child health, and grassroots community development. They recognize teachers as critical partners in the campaign to eliminate violence against children in schools and believe that that the first step for academic success is to build a foundation that will support children as they learn. The goal of implementing this program is to supply teachers with the necessary tools to be effective and nurturing to children in their classrooms. New teacher behaviors will assist students in making life-changing choices.

The first step in the program is self-esteem or the “Inside Out Talk.” Its purpose is to promote independent thinking with regard to how people choose to spend their time. “This concept is tricky to teach, especially to adults,” Jones said. “There are certain things that make us feel good. In America, because we’re such a consumer-driven culture, we often have impulses to buy new shoes or eat a huge bowl of ice cream. But in Africa, we were working in some of the poorest slums. Teaching self-esteem helps students find peace and happiness within themselves, without people, places, or things. The goal is to discover where your true joy exists.”

The second step is sharing, the power of giving. However, there is no word for sharing in Swahili. “Because ‘sharing’ cannot be translated, one of the teachers illustrated what sharing looks like through a drawing on the board. What’s so powerful about sharing is it gets people to think about why they give. You don’t give to get, the gift is in the giving and how good it feels to have impacted another person. Once sharing is implemented, an epidemic of giving will occur.”

The third step, conscience, is to know right from wrong and to illustrate how it feels to tell the truth. “We asked students to recall the first time they lied and to describe how it felt. We encourage the teachers and children to know the importance of truth and we strive to hone in on how important it is to speak the truth even when you get in trouble. We explain that the truth is like a bright light that will guide you through the rest of your life.”

The fourth step is appreciation, or viewing the world through a lens of gratitude. “We attempt to teach the meaning of appreciation by asking what it feels like to be appreciated, and how it feels when you don’t feel appreciated. Getting children and adults to realize how good it feels to express appreciation really starts to make sense to them once they understand the feelings behind their feelings of gratitude. We also try to teach the teachers how important it is to show appreciation to children in a different way, to feel connectedness and the exchange, and to feel the reciprocity of doing something for someone and for them to, in turn, do something for you.”

The last two steps, choices and differences, are very much intertwined. The fifth step, choices, is also referred to as the “Treasure Hunt Talk.” In this part of the curriculum, Jones encourages teachers and students to try new things, embarking on an internal treasure hunt, in order to discover their authentic gifts. “We encourage children to try new activities in order to learn more about their strengths, talents, and abilities.” Lastly, differences mean celebrating what makes you special. “This step helps children understand that their differences are what make them special and unique. Their unique qualities and features are what makes them ‘one-of-a-kind.’ We encourage them to embrace diversity.”

When asked what some of the biggest challenges were, Jones replied, “I don’t like to think of challenges as challenges. I like to think of them as opportunities. But one of the biggest challenges, per se, was standing in front of people whose culture I know nothing about. I didn’t know who they saw when they looked at me. I’d done my research on the culture as much as I could but it’s so much more difficult when you’re standing in front of these teachers and children. It’s critical to know your audience. Twenty to thirty minutes into my talk, they really started to come out of their shell. I knew they love to sing songs, dance, and tell stories, so I listened to my gut and I asked one of the teachers if she would lead us in song. Once that happened, there was lightheartedness in the room. There was laughter. Teachers were truly engaged in what we were teaching them and understood the concepts. When I finished my talk, Giulietta was almost in tears. I was almost in tears. When you touch people’s lives it touches you deeply, very deeply. The biggest challenge is getting outside of your head and being open. Sometimes you have to wing it and try your best.”

“Watching the teachers bring the content to life was quite heartwarming.” At each of the locations, Jones explained, the children were also fully engaged and demonstrated that they understood each concept and participated in the learning. “I couldn’t believe it. We were in an African classroom listening to teachers enthusiastically utilizing the curriculum that I created, to help children become who they deserve to be, was incredible.”

Jones had only been back in the States for 48 hours when we spoke with her about her journey. “Giulietta is still abroad,” she explained. “She works for PayPal/Ebay. She’s a rockstar over there and after five years, they allow their workers to take a sabbatical. This was Giulietta’s sabbatical. This is how she chose to spend her vacation.”

Jones expressed her gratitude for the MSOD program. “Without it, I wouldn’t have been given the opportunity to meet Giulietta. That’s what USF means to me-- opportunity. Giulietta and I have USF core values in our hearts. We believe we’re on this world to make a difference. USF reminded us about that responsibility.”

“Talking about the trip has helped me to stop and reflect,” Jones said. “After a long journey of doing, there isn’t always enough time to just feel and check in to process all that has happened. Sometimes it feels like a piece of Africa is still living inside of me.” This duo embodies Jones’ own saying, “First their minds, then their hearts, and then their behavior.”

She left me with this sentiment, which is salient to all those who believe social change starts with themselves. “Take good care of yourself. And remember to dream big.”