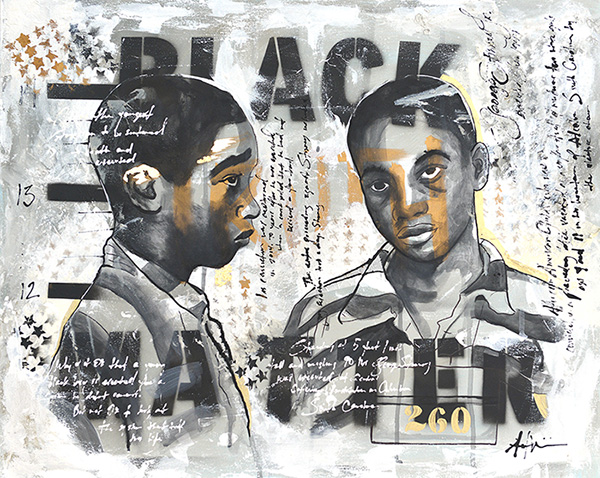 This series of acrylic and gold leaf paintings is inspired by the constant conditioning of the world we live in. These pieces are driven by the narratives we have been told and we tell ourselves to sometimes justify our lack of awareness about issues that may not always affect us. They are all driven by historical context and lived experiences.

George Stinney Jr. is the youngest person to be executed in America. He was 14 years old when he was executed in South Carolina in 1944. He was convicted of murdering two white girls ages 7 and 11. Seventy years later his conviction was overturned when the courts ruled he did not receive a fair trial. Under all of the writing and simple textures on the canvas I wrote BLACK TRUTH MATTERS, because at the heart of every miscarriage of justice is the truth, and what history has shown in many ways is that what people of color know to be true is often times covered up, treated as if it can be easily concealed, when it can’t be. A 14 year old boy was put on trial for a crime he did not do and was sentenced to death. 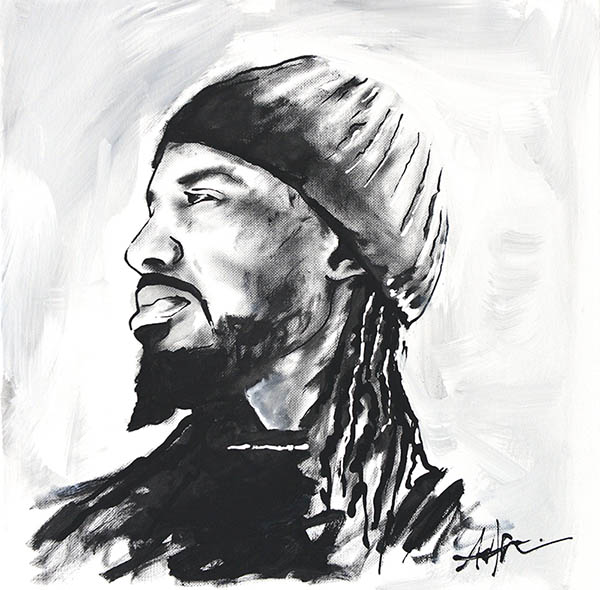 In the last 2 years of my incarceration, I lost my older brother. I had to process and grieve alone and I did that in many ways. This is my family, my flesh and blood, someone who I know needed more understanding, and I wasn’t able to provide that behind the walls. So, one night the thought just popped into my head and I felt compelled to immortalize his beautiful image that shows him holding his head high, shows his power, his faith, and his ability to see things a lot of people could not. And once I was done with that painting I felt as if I was able release other aspects of my grief.

I love you Shaka Jihad. Rest In Paradise.

He Is I Am

Most of the time when people (especially people of color) are profiled, it is due to negative stereotypes. So I decided to paint a man of color in a profile position because of the beauty that comes from that position, but also to make the viewer implicitly create their own narrative. With the words “HE IS, I AM” on the side to keep in mind that for every single person there are two stories. The one they tell about us, and the one we tell ourselves.

In addition to the stories we tell ourselves, there is so much of the story that has yet to be written. I chose to leave the canvas blank, so at any given moment the story can grow, evolve, be added to. The texture is a representation of the rough transition between being seen and being understood. 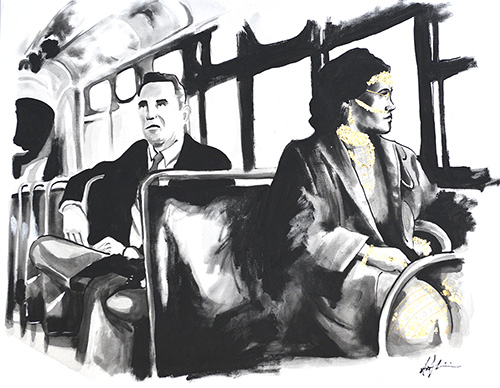 This piece was inspired by the iconic picture of Rosa Parks who refused to sit at the back of the bus. The thing that was so important for me to highlight is the fact that society was conditioned to believe it was wrong for people of color to sit in the front of the bus, and that conditioning is what molded the minds and eyes of so many people. I chose to have her wrapped in gold (Queen-like) because if people saw women for their divinity and royalty then our minds wouldn’t allow our actions to treat them any other way. 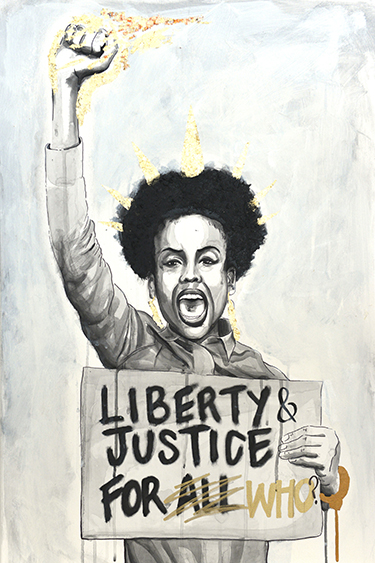 I intended to have the protester bear a striking resemblance to Lady Liberty Enlightening the World because I see protesters as beacons of light and truth. Those who seek refuge from oppression often find themselves on the side of the revolt, which brings about the question written on the sign: Liberty and justice for WHO?

Antwan “Banks” Williams is a co-creator and the sound designer for the award winning podcast Ear Hustle. As a multi-faceted artist, his practices include: dance, visual arts, spoken word, as well as music composition. Antwan has performed extensively for the Marin Shakespeare Company. His choreography and directing can be seen in the work of the Artistic Ensemble, a dance/theater company in San Quentin Prison. In October of 2019, Antwan was released from prison and is currently performing music throughout the Bay Area and touring local schools, sharing his experience of being inside the Justice System.