On a Winning Streak

A month after winning the national Association for Women in Science’s (AWIS) Ellen Weaver Award, University of San Francisco Assistant Professor of biology Juliet Spencer followed up by receiving USF’s Arthur Furst Award for Outstanding Research Advancing Science for the Betterment of Humanity.

“It's been so exciting and unbelievable to win two awards like this,” Spencer said. “I am completely thrilled and shocked.”

In April, Spencer was honored at a banquet of the Northern California chapters of the AWIS for her dedicated student mentoring and commitment to promoting the success of women in the field of science. Spencer is the faculty adviser for the USF student club Women in Science, which maintains an informal affiliation with AWIS.

“We organize campus speakers, develop internship opportunities, and promote research for women in the sciences,” said Spencer of the club. In addition to connecting female science students to role models on and off campus, the club strives to impress upon the club’s members that they, too, are role models for younger students.

To accomplish that, Women in Science members regularly attend the annual Expanding Your Horizons in Math and Science seminar at Skyline College in San Bruno to encourage more young women to study science through a workshop they developed called Cover Girl Chemists, Spencer said. The workshop explores the chemistry behind lip-gloss, mascara, and other makeup products breaking it down for junior college- and high school-level students, using the topic as an entrée to discussing the wide variety of scientific fields.

“I think promoting careers in science and even just interest in science to everyone is important,” Spencer said. “But, women often have fewer role models in these positions, so I try to provide encouragement and guidance and help our students find opportunities for networking, internships, etc.”

Spencer’s research – for which she was recently honored with USF’s Arthur Furst Award – involves five female and two male USF student researchers and centers on the machinations of one of the many variants of the herpes virus (HCMV) that is a leading cause of birth defects.

Her team has made strides in determining how the virus – which can lay dormant in humans for decades before an event causes it to attack the systems of immune-compromised individuals (such as organ transplant recipients and AIDS patients) – is able to trick the immune system, preventing it from attacking and eliminating the virus during dormancy.

“Our work examining the modulation of the immune system by the virus is expected to help in the development of a vaccine for HCMV,” said Spencer, whose team is coordinating efforts with another group of scientists at University of California, Davis.

With papers already published on the research in the Journal of Virology and Virology, she hopes the next breakthrough will provide insights about cell signaling phenomena that are valuable to scientists in a wide range of disciplines. 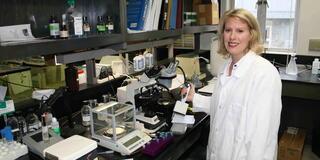