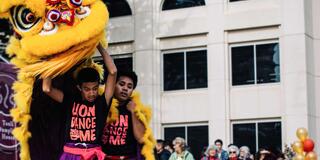 US News & World Report recently ranked USF number two nationwide for ethnic diversity of its student body. We asked these student-group leaders how their organizations are helping to enrich our campus and enhance our diversity.

“We build bridges to other cultural communities, both on and off campus. And every spring we put on a show, called Barrio Fiesta, that promotes and shares the Filipino

experience. We welcome everyone — students, faculty, staff — and we work hard to make the show accurate to our cultural traditions. The show is now in its 44th year, and it sells out two nights at Presentation Theater, which has 450-something seats, so we hope it has an impact, and I think it enriches our campus as a whole.”

“We hold cultural events each year, including our Chinese Lunar New Year Gala and Mid-Autumn Festival. We also show Chinese traditional performances, like traditional dancing and traditional instrument playing. These events are a great way to spread Chinese culture, and they promote cultural exchange between China and America.”

“We create a space for black students and their allies to cultivate a community. We hold events, such as our annual Black Cultural Dinner, where guest speakers talk

about
issues facing the black community. We work with the Office of Admission to recruit black students in hopes of increasing our representation on this campus. And we’ve asked for, and now are working toward, an on-campus living-and-learning community for black students. I’ve seen progress in my four years at USF, but hope to see even more for those students who come after me.”