In 2013, after studying cinematography in undergrad and working more than 5 years in the entertainment industry, Jonathan Hawks (’16) decided to make a career transition to the professional sporting world.

Now Hawks works for the Ontario Reign, an American Hockey League team affiliated with the Los Angeles Kings, based in Ontario, Calif. Since joining the Sport Management masters program at USF, Hawks has gone from Ticketing and Operations Intern to Inside Sales Representative to his current position as Service Executive regarding season ticket sales and retention.

The way Hawks sees it, there has been a direct correlation between his time in the Sport Management program and his success in his new job. For example, Sport Management professor Rich Cellini has a golden rule: “Get comfortable being uncomfortable.” Hawks said this rule helped him stand out and develop in the workplace. Whether asked to do a pre-game skate with a Cub Scout troop or drive 50 miles during rush hour traffic to pick up an item at a specialty shop, Hawks jumped on the opportunity.

“I had the unique distinction of being a 29 year old intern in my organization,” Hawks said. “I did my best to set a great example and show that I wasn't ‘too good’ for any job. People notice activity, and if you take a role and make it your own, no one will look to anyone else because they now depend on you.”

Hawks believes that “your education should complement and give you a better fundamental understanding of the practices and ideas that guide our industry.”

And this is precisely what, for instance, his current business strategy class is doing for him. “It’s given me a great understanding of the fundamental reasons why my team conducts business the way it does,” he said. “Getting a master’s degree won’t get you a job, but it will prepare you to be better at that job than almost all of your contemporaries.”

Hawks loves his job — loves being a part of an organization that is building an even larger professional hockey culture in Southern California — but he could see himself taking a grander role in the business world of hockey. “I like to consider myself simply a hockey fan at heart,” said Hawks. “So in the future I could see myself working for the league, not simply one of its member teams.” 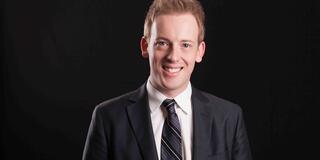