The trip wasn’t a stop on Keys’ The Element of Freedom tour, however. It was a chance for Dyer and four other supporters of KCA – a nonprofit dedicated to providing anti-retroviral drugs, care, and support to children and families affected by HIV/AIDS in Africa and India by engaging the public in the fight against AIDS – to visit a number of the nonprofit’s orphanages and clinics in South Africa.

Shortly after making the donation in March, a text “thank you” arrived on Dyer’s phone, inviting her to visit the KCA Website and describe in one word what Africa meant to her to be entered to win the trip. Dyer chose “strength.”

She made it into the top 100, where contestants were next asked to create an online profile and describe their life experience and skills that would make them good advocates for KCA.

“These children in these orphanages will touch my heart and the truth is I can’t relate to them in all aspects but I can in others,” said Dyer, who speaks of having to grow up fast and endure things she shouldn’t have had to while she was young in her online profile.

“Their lives have been thrown to the ground by this disease that has stolen their families and their opportunities,” said Dyer, an international studies major. “My life (up until my senior year in high school) had been thrown around by people who have changed my life indefinitely.”

Dyer has no doubt she was chosen, in part, for her interest and eye as an aspiring photographer, which she has put to work fulfilling the contest’s challenge to winners to tap into their Africa experience to activate others in their home countries to care about the HIV/AIDS pandemic when they return.

For Dyer, photography is a pastime that has grown into a potential career path as she tries to put her past life’s bad memories behind her and create new memories through her camera’s viewfinder.

“I need to take my camera. I need to go to Africa. And I need to help raise awareness about what is going on and about the AIDS epidemic,” said Dyer, who wants to establish a USF club or campaign supporting KCA when she returns in fall. 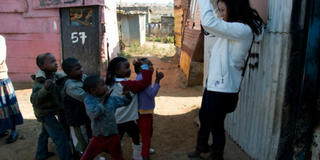