University of San Francisco Army Reserve Officer Training Corps cadet Andrew Chung finished at the top of his class of 450 fellow cadets from across the nation during Operation Warrior Forge this summer.

Chung, a senior history major, overcame injuries and the elements to finish ahead of his competition. While sleeping outside on separate occasions during the training, he suffered two serious spider bites, including one from a Brown Recluse. Still, he persevered during the month-long leadership and war games training.

“I just sucked it up and realized this was a month that could decide my future,” said Chung, whose face ballooned from the first, unidentified, spider bite and who, later, had to be hospitalized for five hours as a result of the Recluse bite.

But, overcoming injuries wasn’t his toughest challenge during Warrior Forge. That was trying to lead a team of “chiefs” with too few subordinates. “The key was to find a balance; to know when to sacrifice my opinion,” Chung said. “Teamwork was key.”

Being acknowledged as the top-performing cadet in a regiment is a significant achievement and places Chung among the apex of Army ROTC cadets in the nation, according to Jeremy O’Bryan, U.S. Army Cadet Command public affairs officer at Ft. Lewis, Washington, where Warrior Forge was held.

“I just took it as blessing,” said Chung, about earning the No. 1 ranking in his class. “But, I’m nothing special. It’s a team thing. God blessed me and gave me a terrific team.”

Warrior Forge, intended to prepare cadets to be Army lieutenants, tested everything he had learned in ROTC, from physical fitness, leadership, and decision making to situational battle drills intended to imitate Iraq, Chung said.

Cadets are trained alongside regular military personnel from various branches, allowed to wear their “wings” after graduation, and often become mentors to younger cadets once they’re back on campus. In addition, airborne training helps build a cadet’s resume, potentially opening the door to further training in air assault, mountain warfare, special operations, and other specializations.

For him, jumping out of an airplane the first time wasn’t scary, Chung said. There were too many procedures running through his mind to allow that to creep in. Before he knew it, he was in the air barreling toward Earth.

“When my parachute opened up, it literally felt like God was holding me up,” Chung said. “It was the most peaceful feeling.” 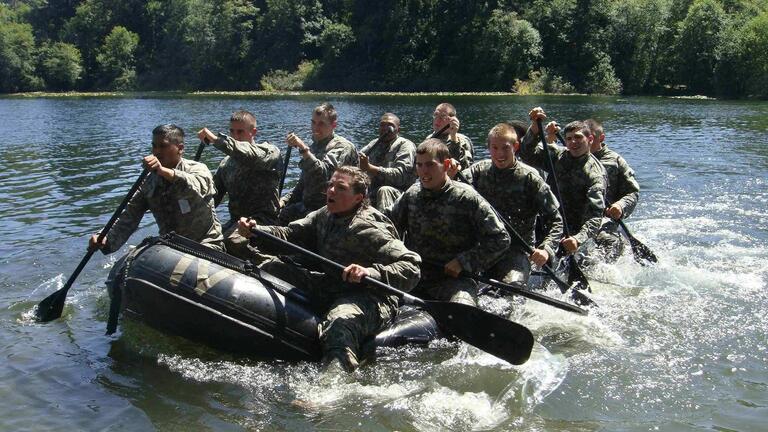