Risk, Reform and Rivalry in the Asia Pacific Today

During the spring semester, the USF Center for Asia Pacific Studies invited graduate students to participate in its 2019 Kiriyama Workshop Series, Risk, Reform and Rivalry in the Asia Pacific Today.

The three-part workshop series, led by the center’s Kiriyama Professor, Dr. Hiroaki Watanabe, offered students a unique opportunity to learn from a scholar specializing in labor migration while he was in residence at the University of San Francisco for the spring semester. Dr. Watanabe, who is currently on sabbatical from the University of Sheffield, UK, has been on campus since February, engaging with students and faculty interested in labor migration and pursuing research on labor market reforms and work precarity in East Asia and regional economic integration in the Asia Pacific. 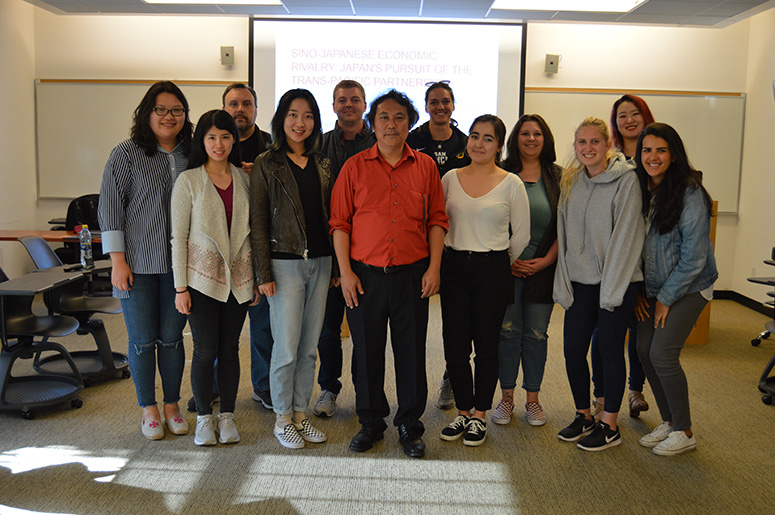 Graduate students in Migration Studies, Asia Pacific Studies, and International Studies, signed up to participate in this workshop series designed to provide them with opportunities to examine labor migration in more detail and to network with students from other programs. Students who attended all three workshops received certificates acknowledging their participation in the series. In the first workshop, Labor Migration in Japan and South Korea, the group discussed labor migration to and migrant working conditions in these countries. Dr. Watanabe encouraged students to examine the factors that promote labor migration in East Asia in the context of regional economic integration. He also helped students understand the institutional factors that contributed to migrants’ poor working conditions, including a country’s immigration and labor market policies. Students considered government attempts to reduce human rights violations of migrant workers and to improve their working conditions as well as the reaction of labor unions.

In part two in the series, Labor Market Reform and Its Socio-Economic Consequences in Japan, the students to examined how labor market reform since the 1990s has contributed to poorer working conditions and Japan’s low fertility rate. Students explored the factors contributing to the current poor work-life balance in Japan, including long working hours and young people’s poor financial situations due to the increase in low-paid non-regular workers. Students also learned about important social policies such as government sponsored day care centers and maternity leave.

In the third workshop, Sino-Japanese Economic Rivalry in the Context of Regional Economic Integration, Dr. Watanabe presented students with a case study on Japan’s pursuit of the Trans-Pacific Partnership (TPP) in the context of the rise of China. He emphasized the importance of theoretical analysis of real-world political and economic phenomena, and encouraged students to apply International Relations theory to the case study. By doing so, the students were able to better understand China’s intentions to establish a China-centered economic order through the implementation of the One Belt One Road Initiative and the United States’ attempt under the Obama administration to introduce the TPP in the Asia Pacific as a countermeasure to the rise of China. Students were able to identify both the economic and geopolitical incentives for Japan’s pursuit of the TPP after the withdrawal of the US (during the Trump administration), from the perspective of its leadership rivalry in East Asia with China. 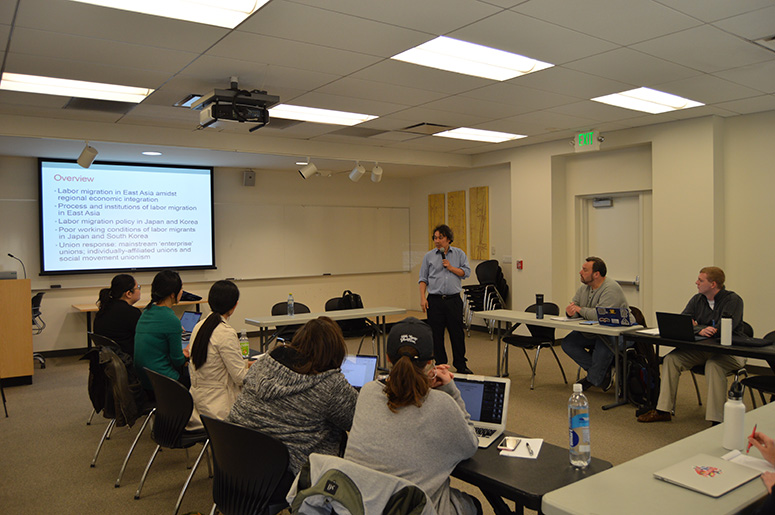 On May 2nd, Dr. Watanabe shared the results of his current research with the community during his public lecture, Prospects and Challenges for the Japanese Economy. Dr. Watanabe began his lecture with an overview of the current political and economic situation in Japan and pointed out the problems associated with the Abe administration’s economic policy (also known as “Abenomics” or “New Abenomics”). While discussing Japan’s monetary and fiscal policies, Dr. Watanabe argued that the Japanese government would not be able to sustain these policies due to their possible negative consequences to the health of the financial system, including that of the Bank of Japan, and high public debt that has now reached 250% of the GDP. He also pointed out that labor market reform has had a negative impact on the socio-economy of Japan in terms of its poverty level and fertility rate and argued that the Japanese government would need to reform non-labor, business sectors that are currently protected due to vested interests. He then introduced the audience to the term, “Galapagos Japan” (Japan’s failure to meet the global standard) by referring to some examples such as Uber Japan, J-Debit, and Japan’s continued use of fax machines. For many in the audience this was surprising and went against Japan’s reputation as a technologically advanced country. He ended his lecture by stressing the need for female and migrant workers to be better utilized as well as challenges that the rise of China pose for the Japanese economy. 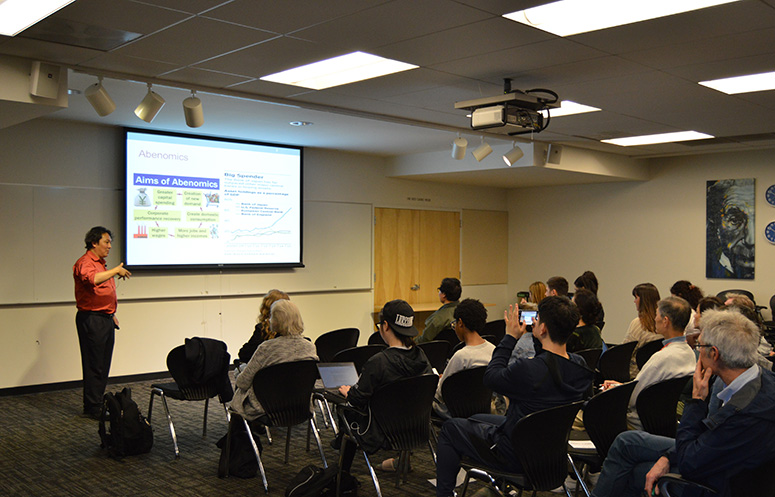 Overall, the Kiriyama workshop series and public lecture provided an excellent opportunity for the USF community to gain a better understanding of the political economy in the Asia Pacific region, especially contemporary Japan’s.