Business alum's food truck court is bursting at the seams

Carlos Muela '09 was chewing over an idea: If one food truck is good he thought, then a bunch of trucks with a bunch of different cuisines, all in one place, must be great.

Boy, was he right. His SoMa StrEat Food Park is booming, hosting 26 trucks and about 1,500 diners every day.

"This business isn't going anywhere but up," says the business and entrepreneurship alum proudly. Since opening last June, sales have jumped 70 percent, and truck owners who are lucky enough to score a spot at the food park are thrilled; there's a waitlist 90-trucks strong. Word has spread quickly among tastemakers and high-profile clientele, too. The Food Network stopped by, and Muela’s food park has served CEOs Marc Benioff (Salesforce), Jeremy Stoppelman (Yelp), and Max Levchin (PayPal).

It’s a win-win-win: Muela profits by renting space to the truck owners; truck owners no longer have to jostle for scarce parking spaces on city streets; and customers enjoy mouth-watering diversity because he switches out the entire lunch bunch for a new set of trucks at night.

After a rough start

The food park draws many more customers than the trucks would draw individually, and diners love the bar, Bay Area sports-viewing parties, and musical entertainment Muela has added.

But things don't always start well when you're a visionary entrepreneur. City officials didn't understand the idea when Muela started pitching it in 2009. Others were perplexed by the location: the corner of 11th and Harrison, then a gritty, abandoned U-Haul lot and homeless camp. “It was a complete eyesore," Muela remembers. "But I loved the location for its proximity to many different neighborhoods, its visibility and sunny microclimate." Perhaps the only thing sunnier was Muela's visionary outlook, and now, his future.

Muela put himself through college working at his parents' two restaurants in the Mission District, Picaro and Esperpento. He currently manages them both, in addition to the food park, but he doesn't run an actual truck.

"The last thing I need is another restaurant," Muela says. 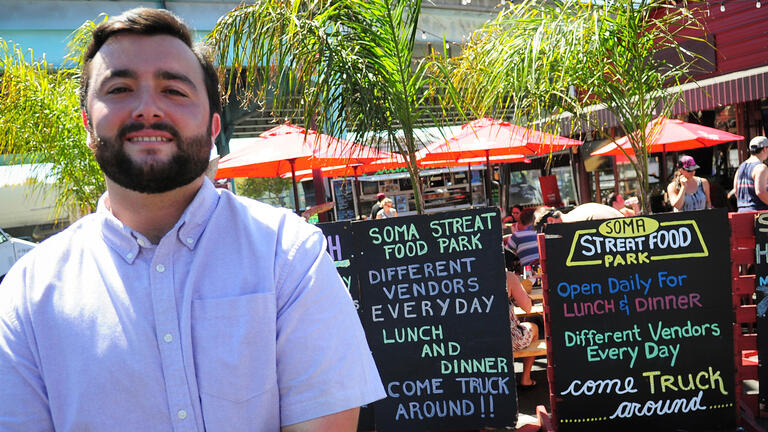