Opening Our Hearts to the Unknown

As the plane descended beneath the clouds and the city opened up below us, I found myself in a space so misunderstood, so shut out. This was the other side of the border. This was the original place where millions of journeys to the U.S. had begun. I had made it.

It was time to embark on an immersion program through Puebla, Mexico and to hear from people directly impacted by migration. Though like many journeys, I didn’t expect what the next few days would hold.

As a result of the spread of COVID-19, the immersion experience was cut short and I found myself back on campus earlier than expected and have since faced a different reality. With the fears we carry toward the future of the COVID-19 virus, and the moments left to reflect on the times before all of this change, this is one experience that I will never forget.

Over the past few years, immigration has been a hot topic that has often been met with contrasting opinions. In the U.S., especially, the media continues to paint immigrants from Mexico and Central America in a negative light.

There were moments when every T.V. station and social media feed featured another story about young children being displaced at the borders or the harsh conditions experienced by migrants as they entered the U.S. The issues were loud and clear.

As someone who had never been outside of the country before all of this, my personal perspective of immigration was narrow. With all of these one-sided narratives being pushed on Mexico by U.S. news platforms and certain political leaders, I felt a need to learn the truth from the source.

I wanted to know the people behind these stories. I wanted to be one of the people who were willing to listen. So when I learned about USF’s Arrupe Immersion program to Mexico, I knew I had to apply.

The Reality They Face

The program brought our group of twelve to the heart of Puebla, Mexico, and our arrival came during a significant time for the country.

Almost immediately, we were told of an issue that continues to devastate people in Mexico and around the world — femicidios. These are sex-based crimes where women face intense violence and abuse simply because they are women.

On March 8th, International Women’s Day, Mexico erupted in protest over these injustices against women and the following day the people enacted a nationwide “Dia Sin Mujeres,” day without women. The first of its kind.

Women disappeared. They weren’t at work, at school, on social media, or on public transportation. One of our program’s guides, Veronica Neve, shared how a day like this would help to show just how important women are to the community.

“Men will have to do all the jobs women would. It will be hard for them… But that’s the point,” she said.

At our host university, La Universidad Iberoamericana Puebla, our guide Bertrand Rault brought us to a mural on the campus of two students who were victims of femicidios.

Rault became teary-eyed and apologized. “It’s just that I have a young daughter of my own,” he said. But as he scanned our group he saw the pain in our faces as well and said, “But I see that you understand.”

As we continued on our journey to meet migrants at shelters and volunteers at community centers, I carried those words with me.

Though we all come from different backgrounds, different struggles, and different triumphs, we are affected by pain in the same ways. It’s what makes us human.

At a migrant shelter at Apizaco, we met migrants from Honduras. They spoke with so much hope and passion in their hearts. Reaching the U.S. was not an if — it was a when. Providing for their families was worth every risk.

All of us reflected on our own journeys into Mexico, and there wasn’t a word that could fully describe the sadness it brought. Any of us could have been in the situations of the migrants we met that day. It was a matter of birth.

Our journey back to the U.S. would not be nearly as hard as theirs, but their will to aspire for a better future never left any of them. They didn’t let the obstacles define them.

When we reached the Casa Ibero Community Center, a small group of us had the opportunity to teach English to a group of children.

As they practiced translating Spanish words into English, one of the students, a six-year-old named Denis, waved for my attention and pointed to a few words on her notepad.

She had written, “happy, feliz, japy.” English, Spanish, and the spelling of her own pronunciation of the word. It’s a moment that continues to bring a smile to my face every time I think of it.

It’s the small things, the things we often overlook, that often hold the most potential for connection. Though we communicate the word “happy” in different ways, the feeling beneath it remains the same.

Having the courage to make an effort to understand one another is the first step to breaking down the fears that separate us the most.

As We Look to the Future

So often we get caught up in the things that divide us — borders, cultures, seas, beliefs. All of it stems from fear. Being brave enough to break past these fears opens us up to all the love and strength we can find within each other, as humans.

For this experience, I am forever thankful for the work that the University Ministry does — for allowing students to learn about cultures in this way and for making me a little more brave.

In spite of not being able to fully complete the program, there will always be a place in my heart for Puebla and the people we met along the way. Even thousands of miles apart, we’re all in this together. No matter how frightening things might feel, I remember to look back on those “japy” memories.

At a time like this, these moments remind me that fear only goes so far. There’s always some hope and light to hold onto, no matter how far away it may seem.

Support is still needed in many areas as the situation continues to unfold worldwide. So we can continue to support our global USF community, consider giving to theCOVID-19 Response Fund »

For more information and the latest updates from USF, please check the university’s COVID-19 resource page 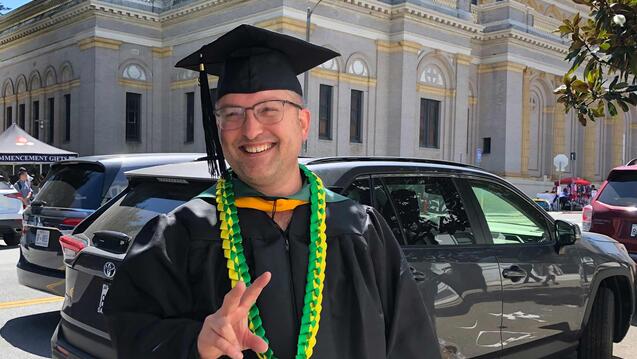