Year after year for more than two decades, students enrolled in University of San Francisco Professor of finance Richard Puntillo’s courses could count on a couple of admonitions, even if parts of his curriculum varied. One of those lessons was that America’s financial markets were the most resilient in the world. The other was that public companies in the United States operated under a superior model of corporate governance, bar none.

That all changed Sept. 15, 2008, when Wall Street investment firm Lehman Brothers entered Chapter 11 bankruptcy, Merrill Lynch agreed to be bought by Bank of America, and insurance giant American International Group required a $40 billion line of credit from the U.S. government or faced ruin. The result: international credit markets froze, sending the world into the worst financial crisis since the Great Depression.

Long established and esteemed principles of finance and economics are now in question if not undermined altogether.

“We now know that what we thought we knew, we didn’t,” Puntillo said.

Puntillo is just one of a number of USF professors to make broad changes to their syllabi in light of the economic recession and credit crunch, a move intended to bring the most relevant and up-to-date information to students.

Where he used to focus on teaching students how Wall Street and banks profitably financed long-term assets with short-term borrowing and how mathematically precise American risk management models allowed banks to keep as little capital on hand as possible so that more could be invested, Puntillo now sees a bigger role for discussing the benefits of tempered financial regulation and for the federal reserve in proactively preventing economic bubbles in the first place.

“The unregulated markets gave rise to a phenomenal amount of innovation in the financial services sector in recent years,” Puntillo said. “That all came at a terrible cost in the form of falling homes values, shrinking stock portfolios, and job losses at record highs.”

Assistant Professor of economics Sunny Wong said he now minimizes textbook theory in his graduate level Money and Banking course to spend more time on the actual news of the ongoing crisis.

“We talked about Lehman Brothers and the problems that its collapse could create and discussed the Federal Reserve’s efforts to recapitalize Citibank all as it was happening,” Wong said.

Economics Professor Hartmut Fischer also redesigned his courses, including the undergraduate Global Economy and the graduate-level International Economics, refocusing them from issues of international trade relations to the inner workings of the international financial system, the role of central banks, and the advantages and responsibilities accrued to the United States as the central hub of the world economy. Regular readings from major financial newspapers were an integral part of the class redesigns.

Fischer, who also taught International Finance jointly with Jacques Artus, visiting professor of economics and former International Monetary Fund research director, asked that students not only read the financial news but show up to class with articles related to economics or the crisis to discuss.

“I think that students need to know that Wall Street is not Main Street and what’s good for Wall Street is not necessarily good for Main Street,” said Fischer, who, like Puntillo, believes the U.S. financial sector was allowed to grow too big in the build up to the crisis at the expense of the broader U.S. economy.

“The thing I liked the most was that Dr. Fischer picked out articles related to the financial crisis almost everyday from the Financial Times, New York Times, and Wall Street Journal and posted them on Blackboard for the class to read,” said Sebastian Crawford, a USF senior majoring in economics who took Global Economy with Fischer in the spring.

The result was in-depth class discussions about the day-to-day changes taking place in the U.S. economic and financial system with Fischer providing historical background and answers to questions. “I definitely came away with a lot more knowledge of the crisis facing us right now,” Crawford said. 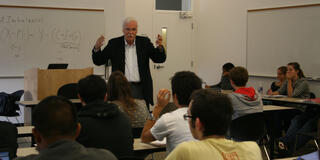