Alumnae: San Francisco supervisor and CNN Hero are among the commencement speakers 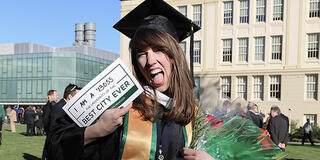 USF hosts its winter commencement just in time for the holidays, honoring the achievements of almost 900 graduates on Dec. 13.

The College of Arts and Sciences graduation begins at 12:30 p.m., with USF alumna and San Francisco Supervisor London Breed ’13 speaking. Breed beat out seven other candidates to win the District 5 supervisor’s seat, which represents the Haight, Inner Sunset, and parts of Western Addition sections of the city—an area where she grew up.

The School of Education and School of Nursing and Health Professions hold a joint ceremony beginning at 3:30 p.m. The founder and executive director of the Homeless Prenatal Program, alumna Martha Ryan ’72, will receive an honorary degree for her work and speak at commencement. Ryan was selected as a CNN Hero earlier this year.

The School of Management graduation begins at 6:30 p.m. Eileen Purcell, coordinator with the Central American Refugee Organization Project, will receive an honorary degree and speak at commencement. Purcell is a sought-after speaker on social justice issues and one of the founders of the Sanctuary Movement for Central American refugees and the National Sanctuary Defense Fund.

All graduation ceremonies will be held on campus at Saint Ignatius Church. You can find a complete schedule and watch USF’s commencement exercises online.