The dramatic population decline of the foothill yellow-legged frog in a number of California rivers is a canary in a coal mine, pointing to poor waterway management and potentially widespread ecological breakdown, according to the latest findings by two University of San Francisco researchers. 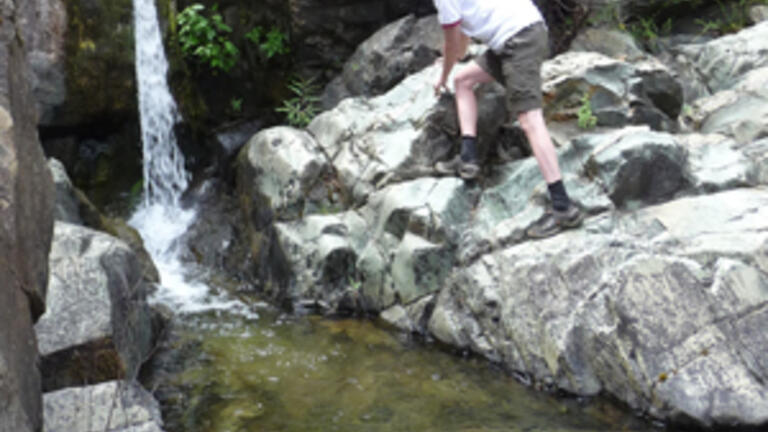 The research by USF Associate Professor of biology Jennifer Dever and graduate student Ryan Peek found that the population of the yellow-legged frogs (native to California and Oregon) – whose life revolves around and depends on running rivers and streams – has dropped by 50 percent from historic levels.

In a first-of-its-kind analysis, Dever and Peek used DNA samples to show that yellow-legged frogs (A Species of Special Concern as designated by the California Department of Fish and Game, indicating that they could be listed as “threatened” or “endangered” if the population decline continues) living along the American and Feather rivers are less genetically diverse than they were in the past, potentially handicapping their ability to adapt to environmental changes.

“Our data from unregulated (free flowing) rivers and regulated (dammed or levied) rivers indicate that dams are causing a decrease in the foothill yellow-legged frogs’ genetic diversity,” Dever said.

In turn, decreased genetic diversity has likely contributed to the frog’s population plummet.

“People need to realize that these frogs are indicators of the overall health of the ecosystem,” Dever said.

Such degradation may have ramifications beyond amphibians, including impacting species that depend on the benefits that ecosystems provide such as clean water, food, purification of human and industrial wastes, and habitat for plant and animal life, Peek said.

While the likelihood of Californians choosing to demolish a substantial number of the 800 dams in Northern California to allow rivers and streams to revert to their natural water flow patterns is improbable, there are effective strategies that could be used to better manage the dams and levies affecting the frogs.

“Generating renewable energy is a great goal but there are ways that dams can be operated that lessen the impact of altered water flows on native wildlife and research has shown that flows that mimic the natural flow, with peak flows in the late winter/early spring that taper down throughout the summer, are much better for frog breeding and survival than having flows that peak at unnatural times,” Dever said.

With additional research on the horizon, Dever and Peek plan to publish their latest findings, which follow Dever’s earlier research, this fall. Recommendations on how to better manage the relevant rivers are likely to follow.