Food Service and Recycling Earn “A”

The University of San Francisco has earned top marks on the College Sustainability Report Card for its food and recycling efforts.

The report card is the only independent sustainability evaluation of campus operations and endowment investments. Published by the Sustainable Endowments Institute, a special project of Rockefeller Philanthropy Advisors, it assesses 300 public and private colleges and universities with the largest endowments.

USF was among the top 91 schools that received an “A” grade in the food and recycling category, which was released before the overall grades for university sustainability efforts.

Whenever possible, Bon Appétit purchases produce from 30-40 local farmers within 150 miles of its kitchens and buys meat from farmers who avoid antibiotics. In addition, Bon Appétit offers a low-carbon diet, which is based on less meat and dairy to avoid the larger associated ecological footprint.

“At USF, we have lowered our beef consumption by 52 percent, simply by showcasing other food items,” said Bon Appétit Resident District Manager at USF Holly Winslow.

The key to her success is running a nimble operation that’s able to change menus in a pinch, for example when a tractor breaks down or gets stuck in the mud and a farmer can’t deliver on time, Winslow said. While staying true to small farmers has required the occasional concession, it has paid off in the form of a farmer-buyer partnership that gives Winslow a voice.

“Some farmers now call to ask what I want them to plant and how much,” Winslow said.

From ridding the cafeteria of food trays – which require hefty amounts of heated water to clean and allow diners to pile on food that often ends up in the trash – to supporting a student movement to reduce the amount of bottled water sold on campus by stocking refillable containers, Bon Appétit uses its influence to prod customers toward greener choices.

USF’s use of compostable containers for (food) takeout and its comprehensive recycling program that diverts 67 percent of the university’s waste, were also touted as progressive programs by the Report Card.

Also at USF, clothes, furniture, and art supplies are donated to local nonprofits, food waste is given to homeless shelters, and landscaping and food waste are composted, the Report Card noted.

Overall, USF has reduced its landfill waste from 1,253 tons in 2004 to 777 tons in 2008, said Joe Murphy, USF environmental safety manager. During that time, the university has implemented a successful cafeteria composting program for which it is currently piloting a residence hall expansion. 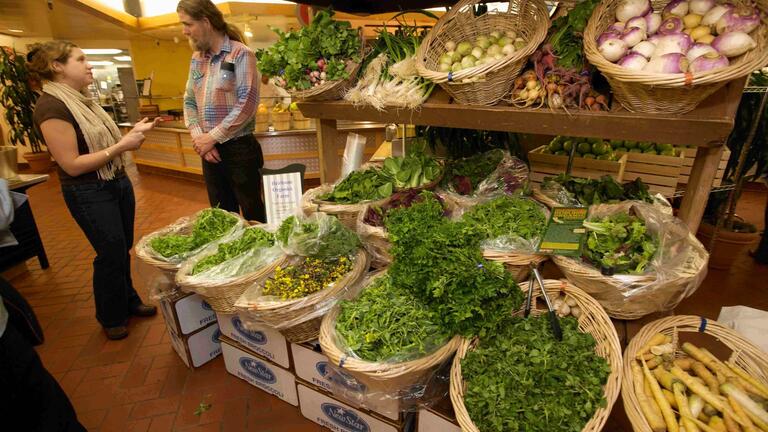