A leading advocate for the abolition of the death penalty in the U.S., Sister Helen Prejean, author of the book Dead Man Walking: An Eyewitness Account of the Death Penalty in the United States (1993), will speak in McLaren 250 Nov. 5 from 1-2:30 p.m. An informal question-and-answer-session and book signing will follow her presentation. 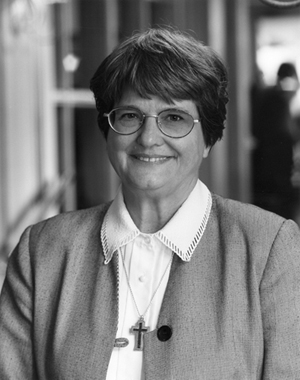 Born in Baton Rouge, La., Sr. Prejean joined the Sisters of St. Joseph of Medaille in 1957. She began her prison ministry, as portrayed in the 1996 Hollywood film Dead Man Walking, in 1981.

The experience was chronicled in her book, which spent 31 weeks as No. 1 on The New York Times Best Seller List and was nominated for a Pulitzer Prize in 1993.

Sr. Prejean’s second book, The Death of Innocents: An Eyewitness Account of Wrongful Executions (2004), tells the tale of two men she accompanied to their executions. She believes both men were innocent.

“University Ministry has a longstanding relationship with Sr. Prejean,” said Enrique Bazan, director of social justice and community action at University Ministry. “She was our first Justice Lecture Series speaker in 1998.”

By bringing Sr. Prejean back to USF, University Ministry and The Joan and Ralph Lane Center for Catholic Studies and Social Thought, which are sponsoring the visit, hope to continue to raise awareness among the university community regarding capital punishment’s desensitizing affect toward human life, the racial disparities of minorities comprising the majority of those on death row, and the $114 million annual cost to California taxpayers to perpetuate the state’s death penalty system, Bazan said.