Professor Moira Gunn, and the BioBusiness Association of the School of Management welcomed famed Biotech Venture Capitalist and industry pioneer Steve Burrill as a guest speaker to their most recent evening event.

We asked Professor Gunn to give us a sense of who Steve Burrill is, and what he represents to the biotech industry. Her replies provide some striking, and inspirational insights that Steve Burrill delivered, and how important his presence is on our campus.

1. A few words about who Steve Burrill is for those of us who are not tuned in to the Biotech Industry?

Steve Burrill is the Founder and CEO of Burrill & Company, specializing in Life Sciences Venture Capital, Private Equity, Mechant Banking and Media. This year, 2011, marks the 25th anniversary of the Burrill Report, the preeminent annual report on the biotech industry. Among his other credentials is that he is Chairman of the Foundation for the National Medals of Science and Technology, and the World Council for Ethical Standards.

2. Does he have an ongoing relationship with our School?

3. What were a few of the key points that he made in his talk?

Of the many surprising points which Steve made, here are a few:

4. What were your personal observations about Steve’s significance?

There are many admirable points to the 40 year investment career that Steve has had. He has been involved with nearly every major start-up in Silicon Valley and more recently, in the biotechnology industry. The fact that he has a degree in business does not stop him from learning and understanding cutting-edge science - and perhaps most significantly, having a vision for bringing it to reality. In the field of biotechnology, business is the vehicle by which science moves from the laboratory to the bedside, to the field, and beyond. Steve has a grasp of the many disciplines which are required.

5. Has, or is it likely that, anything specific — such as internships or jobs — will come out of this event for our students?

6. Anything else that I haven't asked that you think would be worth mentioning?

One of the final words of wisdom Steve left the audience with went beyond biotechnology and applies to everyone -- when you want to build something, make something new, take yourself in a new direction, you can't expect to do it on a few hours on a weekend, or at night. You've got to carve out time in the middle of the day, during the normal week. Investing in your future deserves your best attention and energy. 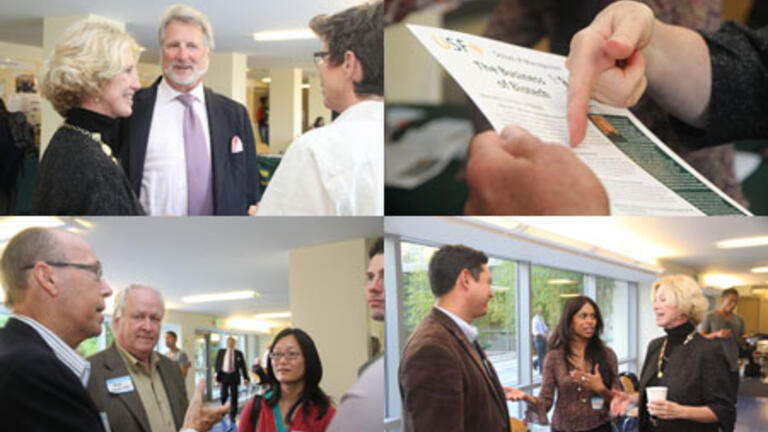