Being a University of San Francisco graduate isn’t required among those driving the Friends of the San Francisco Public Library’s campaign to improve 24 of the city’s 27 branch libraries, but three alums have found it doesn’t hurt.

Sara Bassett ’08, Mary Abler ’04, and Steven Peno ’98 are all part of the largest building campaign in the San Francisco Public Library’s history, with 16 branches being renovated, seven branches entirely rebuilt, and one branch, in the Mission Bay neighborhood, constructed from the ground up. How all three found their way to Friends is purely a matter of coincidence but a happy one, Bassett said. 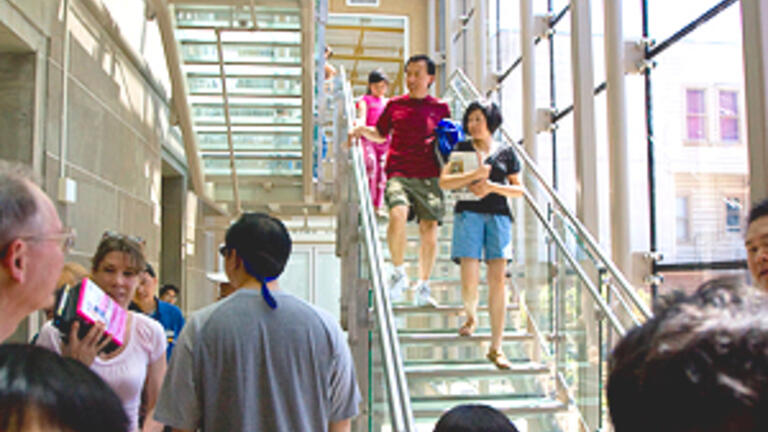 “I can only speak for myself, but I joined the neighborhood library campaign because I wanted to make a difference in San Francisco, the city I love,” said Bassett, when asked what inspired her to become involved.

Construction itself is being paid for with funds from the Branch Library Improvements Program (BLIP), a bond passed by San Francisco voters in 2000. Friends are raising funds to fill a $16 million gap for furnishings and equipment, said Bassett, who majored in sociology at USF and now works as the communications and technology manager for the nonprofit.

Abler, who studied English at USF, started out in Bassett’s position before becoming a campaign organizer and leading or launching several neighborhood branch fundraising efforts as part of the campaign.

Peno, a student of information systems management at USF, is Friends’ annual fund and database manager.

So far, Friends has raised $10 million of its $16 million goal and the final push is on with eight of the final 10 branches scheduled to reopen during the next year. “We have $6 million left to raise and most of it needs to be raised over the next 12-18 months, before the majority of the branches reopen,” Bassett said.

Not only has the campaign been successful in raising funds to outfit branch libraries, but its grassroots nature has reinvigorated neighborhood residents, prompting them to become involved in deciding what each library needs to successfully serve local users.

Sometimes that has meant helping to close the digital divide by offering free Internet access, developing privacy policies that protect users from having information about what books they read or what they view on a computer from being logged and later searched, and offering community meeting rooms to be used after hours.

“Today’s library is more than just a space for books, videos, and music,” Bassett said. “They have job search assistance and computer training classes. They also serve as designated gathering locations in emergency.”

All this is in addition to study areas and programs designed especially for teens and young children, where after-school homework help is available and story time is offered several days a week.