Sixteen months after its launch in the College of Arts and Sciences, the University of San Francisco’s EdgeOnCollege alumni-mentoring program is set to expand to students from all five colleges on campus.

A networking kickoff event will be held in the McLaren Conference Center on March 1 to officially mark the mentoring program’s expansion to include students and alumni from the College of Business and Professional Studies, the School of Education, the School of Law, and the School of Nursing.

It’s a great opportunity for students and alumni from all of USF’s colleges to meet each other and learn about EdgeOnCollege, said Laleh Shahideh, associate dean of student academic services for Arts and Sciences. Shahideh’s office helped establish EdgeOnCollege at USF and is organizing the March 1 event.

Begun in fall 2009 with 46 students and alumni, the Arts and Sciences mentoring program quickly exceeded expectations with 308 students and 146 alumni now taking part.

A mentee for almost a year, Bracken Helmes, a graduate student in organizational development, said his mentor not only helped to ease his concerns about whether he was losing out on valuable career experience by attending graduate school, but acted as a sounding board as Helmes sold his house in Utah and tried to find a place to live and work in San Francisco after being accepted to USF.

“He was not just a guy trying to help me find a job, but a guy that became a friend,” Helmes said of his mentor, Mike Monroe ’70. “He has given me extra stability and someone I can run stuff by and trust his opinion.“

The brainchild of USF biology alum Francis Kong, MS ’95, EdgeOnCollege is an online database that allows mentees and mentors to find each other according to their school network and related interests and career goals.

Kong came up with the idea during a dramatic near-death experience when a plane he was on was forced to do a belly landing. As he thought about the important people in his life during the tense final moment of the landing, several mentors from middle school through college who had expressed faith in him and pushed him to excel came to mind along with his loved ones.

Kong, who now mentors about 90 students, saw his survival as a second chance – a chance to emulate his mentors and help others. So, using his background as a doctor and training as an entrepreneur, he set about creating EdgeOnCollege, now in use at three universities, including USF, with more negotiating for access.

“I love the fact that all of USF’s schools are getting involved,” Kong said. “I hope it breaks down the silos between schools and helps students meet and explore mentors at other schools and colleges.” 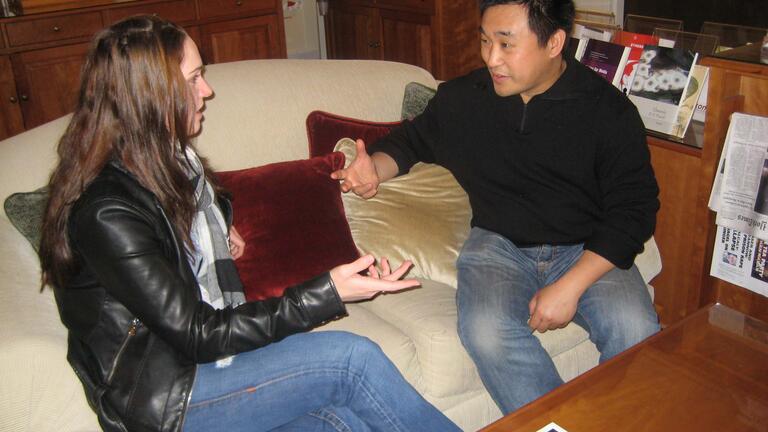