Co-founder of Adobe, Dr. Charles Geschke, spoke to an audience largely made up of MBA students at USF’s downtown campus on March 28. He spoke about leadership, values, failure and success, learning opportunities from his past and the future of business, and emphasized the importance of taking risks to stay ahead of change. “Failure is acceptable,” he said. “Not taking risks is not.” Moreover, he said, “if you do not change before you have to change, you will fail. You have to be an agent of change to succeed. You have to love change.” The interactive session was an opportunity for MBA students and faculty, MBA alumni and School of Management staff to ask Dr. Geschke his opinion on business matters. “It was truly an honor to have met one of the great innovators of our time,” said Francis Tan, a full-time MBA student, adding that hearing Dr. Geschke speak was a “highlight of my MBA program thus far and very inspiring.”

Dr. Charles Geschke co-founded Adobe in 1982 along with Dr. John Warnock. Inventors of the PDF, amongst other things, they forever transformed how users create and consume content across every screen. He and Dr. Warnock broke several business rules when first starting out, said Dr. Geschke. “People always tell you to find a gap in the market,” he said. “We didn’t do that. We had no idea if there even was a market for what we were trying to do.” Adobe has always brought out technology before people knew they needed it, Dr. Geschke said, “and we’ve always given them more than they expected.” Both Dr. Geschke and Dr. Warnock continue to serve as Chairmen of the Board at Adobe.

“There is a big difference between a manager and a leader,” said Dr. Geschke. “A leader needs to have a dream. A leader attracts other people to them, inspires them. But a leader also needs to be firm.” Dr. Geschke shared much business advice with the event attendants, including some personal stories. “I did something by accident that turned out to be the best decision I ever made,” he said. “I married a woman who is much, much smarter than I am.” People should do the same in business, he says. “Always hire people who are much smarter than you are. There is no substitute for brain matter.”

“I was truly inspired to learn how Dr. Geschke and John Warnock ran Adobe,” said Jackie Sheely, a second-year JD/MBA student, “[his advice on hiring people], and his insights regarding corporate culture and having employees treat customers, fellow employees and managers as they want to be treated [themselves] are so simple, yet effective.” 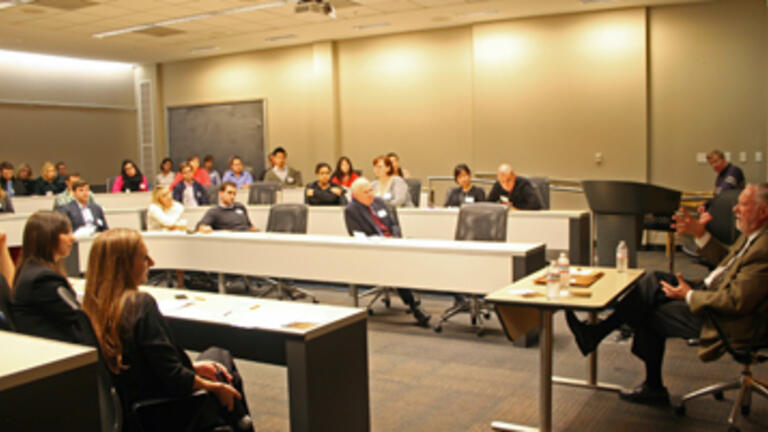 Dr. Geschke is a product of Jesuit education and has a long-standing relationship with USF. He served on the Board of Trustees for 17 years and was Chairman for 4 years. His daughter is a USF alumna and the Geschke Learning Center was named after him and his wife, Nan. Like USF and the Jesuit schools he attended, Dr. Geschke feels very strongly about the importance of business ethics. He said that throughout his career he has tried to keep focus on his morals and values while trying to do good business, and it is something he in turn advises future entrepreneurs. “At every point in your career you’re going to learn something,” he said. “And shame on you if you don’t think about what it means, what its implications are.”

On the subject of making positive change in the world, Dr. Geschke emphasized that big change can only happen through good strategy. “It isn’t right to just do something good,” he said, “it has to be good business, too.”

Many audience members expressed how educational and inspiring they found the Q&A session. “What Dr. Geschke said about being the agent of change really hit home for me,” said Fehmi Hamdan, a current MBA student. Fellow MBA student Ben Herhold could relate. “The main reason I came,” he said, “is because I think it’s important to meet people who believe in change and innovation. Charles Geschke embodies that.”

“Having the opportunity to listen to Dr. Geschke was a fantastic experience,” said Doug Grutzmacher, a first-year MBA student. “I’m very grateful for having heard the story of someone who has been a pioneer of innovative technology, and I look forward to watching Adobe continue to create exciting technical products.”