For 35 Years, This Gift Has Transformed Lives

Six years ago, Angela Cheda was accepted to the MBA program at USF. And yet, she wondered: Did I make the right decision, leaving my marketing career to go back to school?

She had moved home with her parents to start graduate school, and she was out walking her parents’ dogs, feeling unsure about the transition.

She checked her phone and saw she had received an email from USF. The message said the dean had selected her to receive a $10,000 scholarship, the Cassou-Shan Scholarship for MBA students.

“I’m really thankful for the scholarship,” she says. “It was such a big ‘What if?’ and ‘Should I really do this?’ Then, I got the scholarship. It was the deciding factor.”

Today, Angela, who graduated with her MBA in 2012, is a marketing manager at Blue Shield in San Francisco. An internship there after her first year in the MBA program turned into a full-time job.

For more than three decades, the Cassou-Shan Scholarship has supported MBA students at USF. Today, the scholarship has a new donor who has pledged a $1 million match challenge to continue building the endowment for future generations of students in the School of Management.

The Story of April and Phil Cassou

The feeling that Angela had that she was “meant to do this” is something that one of the founders of the scholarship felt, too, at a pivotal moment in her life.

Alumna April Cassou, a former faculty member in the USF School of Law, recalls having that feeling in 1981, when she and her husband, Phil Cassou, also an alumnus, did something remarkable.

The Cassous offered to pay tuition for a young student who was admitted to the MBA program but had no money to pay for it. As graduates of USF themselves, the Cassous knew the importance of education, and they wanted to give a promising student a chance.

“Sometimes God taps you on the shoulder and says, ‘This is it,’” April says, recalling the moment she decided to help out.

The couple’s generous donation enabled the student, who today wishes to remain anonymous, to complete his MBA at USF and go on to receive a Ph.D. at the University of California, Berkeley. He became a professor at the Wharton School of the University of Pennsylvania and is now chairman and CEO of one of the largest private equity firms in Asia.

The generosity of April and Phil Cassou continued over the next 10 years. They established a scholarship for MBA students at USF, the Cassou-Shan Endowed Scholarship, and it was endowed in 1992.

An annual scholarship, it is awarded to an MBA student who has demonstrated unique promise, exceptional intelligence, and outstanding personal discipline. Dozens of students have benefitted from the scholarship.

In 2015, an anonymous donor created the match challenge for the Cassou-Shan Scholarship, pledging a $1 million challenge. To help build the scholarship, this donor will pay $1 for every $2 contributed by other donors.

The intent of the scholarship remains the same as when it started — to award it annually to a top student with demonstrated need to complete an MBA. The scholarship is awarded at the discretion of the Dean of the School of Management.

The Cassous, meanwhile, continue to be in contact occasionally with the first student they helped out so many years ago.

He and April met in the University Center when they were undergraduate students, and they have been married over four decades. They have been giving to USF for 37 years, and Phil was instrumental in helping set up the Class of ’68 Endowed Scholarship Fund.

They are happy to have helped so many students, but they do not want to take all the credit.

“There are a lot of students out there who’ve accomplished so many things, after being given the scholarship, and I’m happy about that,” says April BA ’69, JD ’71. "It's a great investment in the future."

For Angela, receiving the scholarship changed her life.

“It was that next stepping stone,” she says. “It meant there were people looking out for me before I even started classes. I’m really thankful for it.”

Interested in supporting what April and Phil Cassou started? Find out more 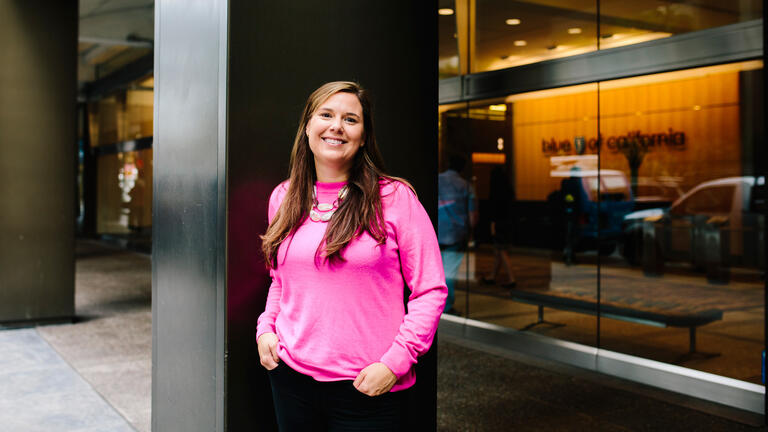 Angela Cheda was awarded the Cassou-Shan Scholarship for MBA students. She is a marketing manager at Blue Shield in San Francisco.