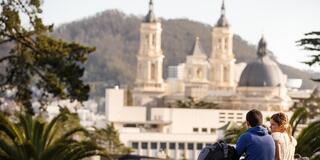 In the latest U.S. News & World Report college and university rankings, USF continues to shine as a top-tier university.

USF maintained its place among the top 100 national universities ranked by U.S. News & World Report for the 2020–21 academic year. Highlights from the new rankings report include:

“We are extremely pleased to maintain our ranking in the top 100 national universities, in large part because the U.S. News & World Report ranking methodology recognizes our mission as a Jesuit institution,” said USF Provost Don Heller.

“Our ranking this year is also particularly gratifying considering that U.S. News & World Report added 80 institutions to its national university rankings," said Heller. “The fact that we maintained our top-100 position from last year is a testament to how well our students and the university are doing in comparison to a much larger pool of strong competitors.”

Heller pointed out that U.S. News & World Report ranks USF 39th in the country for outperforming its predicted graduation rate. In other words, students at USF graduate at a rate higher than would be predicted by their demographic profiles.

In addition, Heller said, USF students who receive federal Pell Grants — students from families whose total family income is $50,000 or less — graduate from USF at a rate higher than the university’s overall graduation rate, demonstrating USF’s commitment to those who historically have been underserved by higher education institutions.