On July 23rd, the School of Management hosted an "Emerging Issues in Homeland Security and Disaster Response" conference.  Topics of the conference included San Francisco's earthquake preparedness, Hurricane Katrina and the BP disaster response, lifelines and crisis situations, emergency operations, chemical and biological weapons and community resilience. The conference was attended by 115 of the Bay Area's public safety and security professionals - police chiefs and officers, fire chiefs and officers, utilities commission members, planning and force readiness department members, NERT trainers and trainees, and others - and university professors with related expertise.

"It's important to talk about these issues," said Professor Anthony Ribera, "not just immediately after a disaster when the fear is fresh, but all the time." The conference was a collaboration between Dr. Ribera, Director of USF's International Institute of Criminal Justice Leadership, and the School of Management's Associate Dean Catherine Horiuchi. After attending cyber security conference, Dr. Horiuchi had the idea for the conference, and Dr. Ribera, a former San Francisco Chief of Police and creator of USF's annual Law Enforcement Leadership Symposium, pulled together the Bay Area community.

"In San Francisco, community is the way we approach every disaster," Chief Greg Suhr, of the SF Police Department, said during his opening remarks. "We train to be ready. I applaud USF - it's so important to continue the conversation on disaster preparedness, we'll all just get so much better. It's very likely that there will be another major earthquake within the next twenty years, and we'll be ready because we're doing things now."

During Chief Joanne Hayes White of the San Francisco Fire Department's talk on San Francisco's earthquake preparedness, she said "It's an all-hazards approach. It's about coordinating everyone, not just fire and police. Our message is, the more prepared, the more efficient, the more quickly you can move into the recovery phase." Kyle Merkins, of the Division of Homeland Security, agreed with her. "The key to preparedness is to have a plan and to practice the plan," he said. "Relationships are crucial. We're lucky in San Francisco that we have built great relationships."

During panel discussions on the topics of restoration of lifelines in crisis situations and community resilience in disaster situations, panelists discussed San Francisco's crucial resources during disasters. Most of San Francisco's water supply comes from Yosemite National Park and crosses three fault-lines along the way. However, San Francisco also has giant underground reservoirs of water stored all throughout the city, that are accessible for the fire department to use in case San Francisco's main water supply becomes compromised during a disaster such as an earthquake.

Panelists discussed the Neighborhood Emergency Response Team (NERT) program, which started after the 1989 earthquake where civilians played a crucial role in helping fire fighters. Civilians receive training from the SF Fire Department that enables them to organize themselves as an autonomous group to help respond to immediate incidents independently. They receive medical training, triage training, triage of buildings, and training in the Incident Command System that is used to communicate between medical, police and fire teams in the event of a disaster. Over 20,000 people have been trained in the NERT program since 1999.

"Knowledge is power," said the School of Management's Cheryl Cain, a trained member of NERT. "NERT helps you with the psychological preparedness. Every role you can provide is a vital role in the event of an emergency. My family was in the 1906 earthquake. It has prepared me in terms of amping up my personal preparedness." Out of the NERT program arose the ALERT (Auxiliary Law Enforcement Response Team) program, which just started this year and is spearheaded by the SF Police Department. NERT graduates receive additional training as ALERT members, and both groups can work side by side in the aftermath of large-scale disasters.

"This is a unique conference," said Dr. Dan Haverty, retired Fire Chief, "it's hosted by the university, without any funding, and it's just fantastic to bring people together like this to work towards realistic and sustainable solutions. I was delighted with the invitation to come speak here."

"We had a really excellent turnout," said Dr. Ribera after the conference. "This was a cooperative effort between USF and local government leadership. Today's presentations and discussions prove that we have a great leadership team in place in San Francisco that works well together, and that is supportive of each other."

School-wide, USF is currently partaking in the Campus Resilience Pilot Program as one of seven universities selected within the U.S. As part of this program, USF will work with the Department of Homeland Security to draw on existing resources, collaborate with federal, state and local stakeholders and identify innovative approaches to promote campus resilience, and in the long term to help all U.S. educational institutions become safer and more prepared. 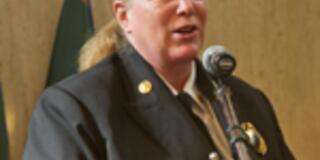